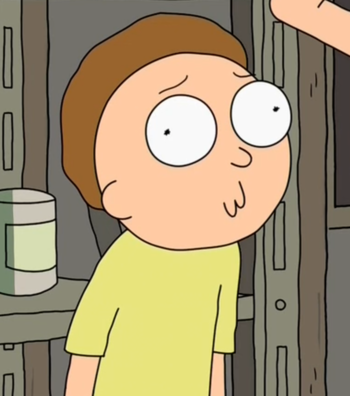 Rick's good-hearted and impressionable grandson who falls victim to playing the role of his sidekick. Morty is a young high school student who has trouble fitting in, especially given the circumstances he faces at home. He likely has a disability of sorts, and has trouble keeping up with the other kids in class, but he is proven to be pretty badass outside of school as Rick's side. He also has plenty of Hidden Depths, frequently proving himself to perhaps be the only one who has any skills in making heads and tails of the madness and chaos Rick tends to generate around him.