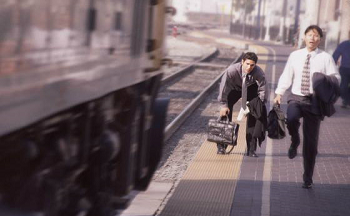 "I missed the bus! And that is something I will never ever ever do again!!"
— Kriss Kross
Advertisement:

The Hero, often an Unlucky Every Dude, is relying on the bus/train/space shuttle to take him to his destination. In Fictionland, nine times out of ten he'll arrive too late. To rub some salt into the wound, he might get there just in time to see it leave.

In a mundane, slice-of-life series, it can mean as little as having to walk to work or school. In more dramatic works, it can have dire consequences, especially if The Hero is left stranded somewhere (or when).

A common variant is taking the wrong bus, which could get you just about anywhere.

All that matters is that the character misses his ride, no matter how hard he tries. Can also involve ensuing hilarity.

This has probably happened to you if you take public transit on a regular basis.

Can be avoided by Racing the Train. Not to be confused with Put on a Bus, With a Foot on the Bus, or Missed the Call, which are very different tropes.