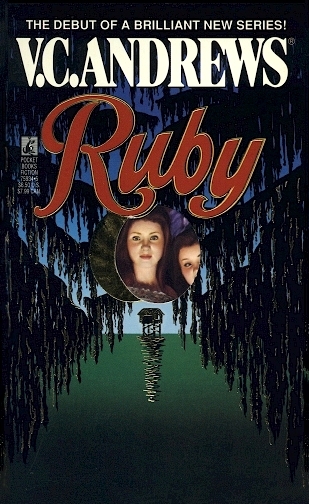 In the heart of the bayou, Ruby Landry lives a simple, happy life. But innocence can't last forever.... note Cover of the first US edition, stepback by Lisa Fallkenstern
Advertisement:

The Landry series is a series of novels published under the name of V. C. Andrews, but is actually the second series written entirely by the Andrews estate-approved ghostwriter Andrew Neiderman.

Ruby Landry is a beautiful budding artist who lives in a swampy backwater of Louisiana with her kindly Grandmere Catherine and her drunken, gambling Grandpere Jack after the tragic early death of her mother Gabrielle. In spite of their impoverished life, Ruby loves the beauty of her Cajun world and dreams of being a famous artist in New Orleans. Ruby is in love with Paul Tate, a nice boy from the good side of the swamp, until Grandmere Catherine informs them both that Paul is actually Ruby's half-brother, born of Gabrielle's affair with a married man. Then Grandmere Catherine dies, and Ruby's life is turned upside down when she learns that her Disappeared Dad is a wealthy New Orleans aristocrat, and that she herself is half of a pair of twins Separated at Birth. Ruby travels to The Big Easy to find her father and meet her unknown sister, only to find that Aristocrats Are Evil. But Ruby is determined to make something of herself, to be seen as worthy for her own talents and merits, and to make her beloved Grandmere Catherine proud.

The second book, Pearl in the Mist, continues Ruby's story with her spectacularly rotten New Orleans relatives. After her father Pierre dies, Ruby is left in the hands of her Wicked Stepmother Daphne, who would like nothing more than for both of her husband's children to disappear. Daphne ships the twins to a Boarding School of Horrors, where Giselle, now in a wheelchair, gleefully goes about ruining Ruby's reputation. Ruby finds herself pregnant from a fling with Giselle's longtime boyfriend Beau and ends up fleeing back to the swamps to save her baby, the titular Pearl.

In All That Glitters, Ruby agrees to a (mostly) Sexless Marriage with her childhood sweetheart/half-brother Paul in order to give her daughter a name and a stable family life, even though she pines for her New Orleans lover Beau. Beau, meanwhile, is trapped in a loveless marriage to Giselle. Ruby and Beau start an affair, which Paul condones even though he himself is desperately in love with Ruby. When Giselle falls into a Convenient Coma, Ruby finds herself agreeing to a sinister plan so that she can be with Beau.

Hidden Jewel takes up the story of the now-college-age Pearl. After her younger siblings suffer an accident that leaves one dead and the other no longer willing to live, Pearl is horrified when her mother Ruby seems to abandon the family for the swamps, while her father Beau becomes a depressed, alcoholic wreck. Believing that only her mother's Cajun magic can save the family, Pearl ventures into the swamps to search for her, only to find love in the arms of a poor-but-honorable Cajun man.

The final book, Tarnished Gold, a prequel told from the perspective of Gabrielle, reveals still more family secrets (as well as famously misspelling Gabrielle's name throughout). Gabrielle is a beautiful and carefree Nature Lover until the day a wealthy man finds her alone in the swamps and rapes her. Finding herself pregnant, Gabrielle is forced by her money-hungry father to go into hiding in the house of her rapist, whose wife wants to pass off Gabrielle's unborn child as her own. After this harrowing experience, Gabrielle fears she will never be able to love another man, but fate conspires to bring her both true love and heartbreaking tragedy.

In spite of some of the more outlandish aspects (the Sequelitis grows exponentially as the series goes on), the Landry Series is largely regarded as one of the best-written of the ghostwritten series and was very well-received by most fans. A TV miniseries based on the Landry books has languished in Development Hell since the late 1990s but was resurrected by Lifetime Television and slated to be released in 2020, only to be waylaid by the COVID-19 Pandemic. It finally aired (minus Tarnished Gold) in March of 2021.