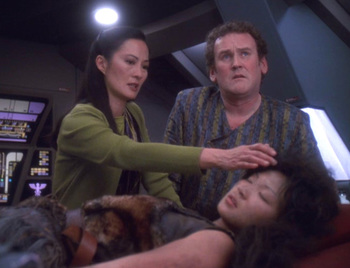 Boy, Molly's sure grown.
In this episode of "O'Brien Must Suffer", Molly gets sucked into an ancient portal device, and returned as an 18 year old who's reverted to a savage mindset. Elsewhere, Worf takes a crack at babysitting Yoshi.