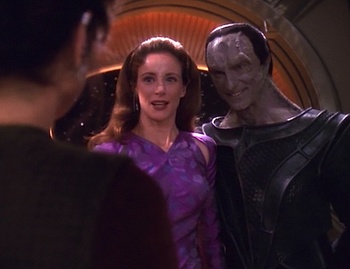 "It seems my interest in you has gotten a lot creepier in hindsight, Nerys."
Advertisement:

It’s the 60th anniversary of the birth of Kira Meru, the mother of Kira Nerys, who died during the Occupation in a labor camp. To honor the memory of her mother who she believes died when she was three, Kira orders Bajoran lilacs, her mother's favorite. She had always admired her mother, whom her father described as one of the bravest women he had ever known.

That evening, however, Dukat sends Kira a coded transmission. Ostensibly to come clean about his feelings, Dukat taunts Kira with the knowledge that her mother did not die in a labor camp but had lived for several years before passing away as Dukat's lover! Kira accuses Dukat of lying, but Dukat reveals that he knows Meru loved Bajoran lilacs and had a scar that very few people knew of. Starting to doubt her impression of her mother, Kira asks Captain Sisko to arrange for her to access the Orb of Time, so she can get to the bottom of the mystery.

Gazing into the Orb, Kira travels back in time to the labor camp where she grew up and her father said Meru died. There, she meets her parents and their children: Reon, Pohl, and little Nerys. After defending the couple from some desperate Bajoran toughs, she introduces herself as "Luma Rahl" and befriends Meru. Shortly thereafter, Cardassian soldiers and a Bajoran collaborator announce that some of the women working there were selected to be taken to Terok Nor to work as "comfort women" for Cardassian staff, with their families compensated with additional rations and medicine. Meru and "Rahl" are among those selected, and Kira watches as Meru is tearfully ripped away from her family.

Upon arriving at Terok Nor, the comfort women are lavished with fine dresses, fresh food, and showers before meeting with the Cardassian brass, including Gul Dukat, the station's Prefect. Dukat's comparatively kind behavior toward the women comes as a surprise to them. He takes a liking to Meru in particular and uses a dermal regenerator to remove her scar. At at the ensuing party, Dukat comes to Meru's defense against an overly handsy officer. To Kira's chagrin, Meru seems taken with Dukat's act, which she learns has been employed on many Bajoran women before.

Kira returns to the quarters of her and Meru, only to find Meru gone. The Bajoran collaborator explains that she was now tending to Dukat personally. Kira lashes out at him and his Cardassian guards but is subdued and thrown into the refugee center on the Promenade for her trouble. For the next few weeks, she makes connections with the Bajoran resistance and learns what she can about Meru, who has been gallivanting with Dukat.

Dukat summons "Rahl" to catch up with Meru as a favor to his paramour. Kira is disgusted to the pair so cozy. When Dukat leaves, Kira criticizes Meru for enjoying the luxuries that come with sharing Dukat's bed while forgetting about her family and people. Meru tries to assure Kira that Dukat is not the monster she makes him out to be, but Kira is unconvinced, seeing her own mother as a collaborator. After returning to the refugee center, Kira agrees to help the resistance try to assassinate Dukat. When her contact instructs her not to warn Meru about the bomb to save her life, Kira agrees without hesitation.

Kira asks the guards to let her be a comfort woman again and to be taken to Meru to apologize. Dukat takes his leave so the two can talk, but not before giving Meru a data rod. As Kira surreptitiously plants the bomb, Meru plays the message on the data rod. It's from her husband, Kira's father! To Kira's surprise, he thanks her for her sacrifice, telling her that the children have been well cared for and are eating better now. Dukat had kept his word! More shocking still, Meru's feelings for her husband had never faded, and she chokes up when he says that he misses her.

Kira suddenly has a change of heart, warning Meru and Dukat to flee the quarters just moments before the bomb detonates. The Orb's vision ends shortly afterwards, and Kira finds herself back in the present.

Afterwards, Kira discusses her experiences with Sisko. In the past, Kira had always believed there was a clear-cut difference between collaborators and patriotic Bajorans, and she admired her mother as a hero while despising the collaborators. Now, however, the line between the two is not as clear. According to her research, her mother lived for another seven years in comfort while untold millions of Bajorans died. Sisko asks Kira why she saved Meru's life, and Kira admits that a part of her wishes she left Meru to die... but in the end, no matter what she had chosen to do, it didn't change the fact that Meru was still her mother.