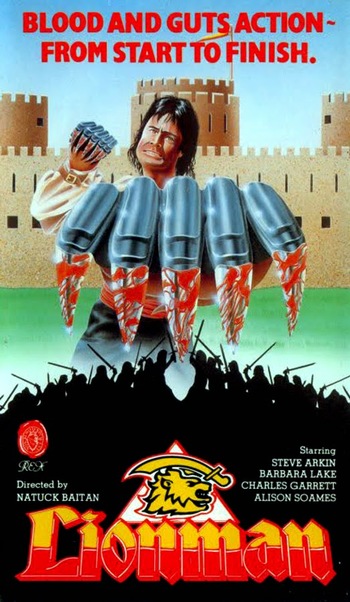 No Aslan, you may not scratch my back!

Aslan Adam, or Lion Man, also known by it's international release title The Sword and The Claw, is a 1975 Turkish movie starring Cüneyt Arkın.

Best described as Tarzan meets Battal Gazi, Cuneyt Arkin stars as Kilic Aslan, an Anatolian prince whose father, Sultan Suleiman Shah, was murdered by Christian invaders led by the warlord Antuan, who took over the kingdom while Aslan was a mere baby. Taken into the woods by the loyal vizier, Aslan ends up being raised by a pride of lions, becoming a jungle warrior with razor-sharp claws, extreme agility, and capable of performing absurd feats of strength. When returning to civilization, Aslan - a name he adopts for recognition of his adoptive lion family - discovers his royal lineage, and seeks revenge against Antuan.