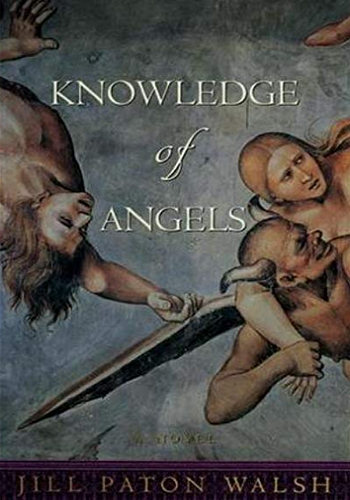 Knowledge of Angels is a philosophical story by Jill Paton Walsh set in a fictional country, Grandinsula, based on Mallorca, following an atheist named Palinor and a girl raised by wolves named Amara, and documenting their actions and responses to being thrust into a medieval Christian society.
Advertisement:

The first main character, Palinor, is found washed up on a beach, near dead and with no forms of identification or proof that he is who he says he is, an elected Prince of a foreign land. No one from Grandinsula has heard of this country, and it is soon learned he does not believe in God, an offense punishable by death. It falls to the Cardinal Prince of Grandinsula to convince Palinor to convert, and he delegates this task to the loyal Church scholar Beneditx. Beneditx has many theological conversations with Palinor, yet fails to convince him to convert (and, in fact, ends up suffering from a Crisis of Faith himself).

The other side of the story, with Amara, focuses on how a group of nuns hope to raise her to become 'human', and yet keep her ignorant of God, so as to see whether knowledge of God is innate or learned — a plan orchestrated by Severo, as, if it can be proved that humans are not born with knowledge of God, then Palinor will not be held guilty of rejecting God — rejection can be punished, ignorance cannot be. However, though early tests with Amara would suggest knowledge is learned, she is later coached by the nun caring for her to proclaim belief in God, so she will be let go rather than kept confined waiting to see if she finds it by herself. Thus it is left unclear as to whether this knowledge really is innate or not, although Amara shows no signs of it before this.

Either way, the Church authority uses this as proof of Palinor's sin, and puts him to death for heresy.

It's on the A level syllabus.