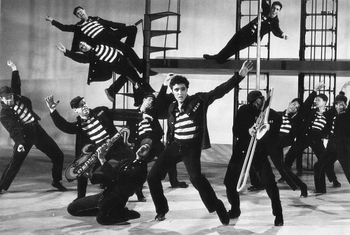 Vince Everett (Elvis) is a cheerful, happy-go-lucky construction worker who becomes less happy-go-lucky when he accidentally kills a man in a bar fight. Vince is convicted of manslaughter and sent to prison. There he becomes cellmates with Hunk Houghton, a former minor country music star serving a stretch for bank robbery. Hunk teaches Vince to play guitar and, when a national TV network conveniently decides to broadcast a jailhouse talent show, Hunk gets Vince a place in the program.

Vince gets out of jail and tries unsuccessfully to get a singing gig at a nightclub Hunk told him to seek out. The job doesn't work out, but luckily for Vince, while there he meets lovely Peggy Van Alden (Judy Tyler), a music promoter. Peggy thinks Vince has potential as a recording artist. With Peggy's help, Vince climbs the ladder of showbiz success, but not without some hiccups along the way.

Famed songwriting duo Jerry Lieber and Mike Stoller wrote the famous theme song, "Jailhouse Rock", which became one of Elvis's biggest hits and one of the most iconic songs of the 1950s. They wrote three other Elvis songs for the film as well: "Baby I Don't Care", "I Want to Be Free", and "Treat Me Nice".

Judy Tyler, who played female lead Peggy, was killed in a car wreck at the age of 24 just sixteen days after production wrapped on Jailhouse Rock. A grief-stricken Elvis skipped the film's premiere, and apparently never did watch the movie.