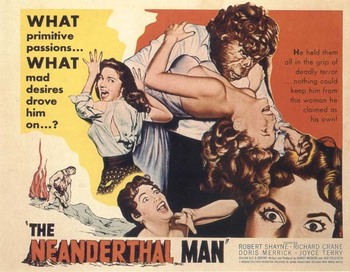 The Neanderthal Man is a 1953 B-Movie starring Robert Shayne. Professor Clifford Groves, a celebrated anthropologist, moves with his wife and daughter to the Sierra Nevada so he can work on his masterpiece: a serum that can reverse a million years of evolution. He tests it on himself, turns into a Neanderthal, and goes on a killing spree.

The Neanderthal Man contains examples of: