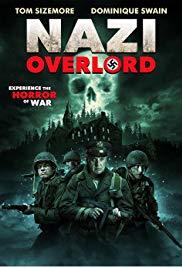 Experience the horror of war.
Advertisement:

Nazi Overlord is a 2018 American Sci-Fi Horror war movie produced by The Asylum and starring Dominique Swain and Tom Sizemore.

It's the night after D-Day, and some Allied soldiers have been given a crucial mission. You see, the Nazis have kidnapped a British scientist and are keeping her hostage to build a bioweapon. They have to bust in, and take her back. Unfortunately, the experiment was in making Nazi Zombies, and now the soldiers have to fight for their lives and make sure the tides of war do not turn.