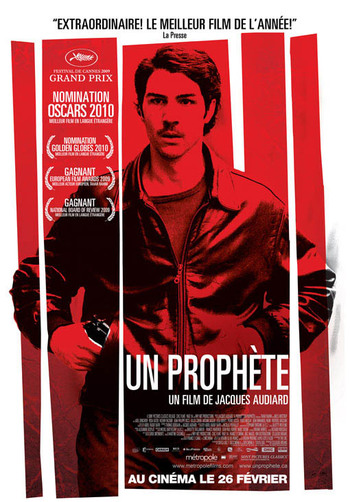 A Prophet (original title Un Prophète) is a crime drama film directed by Jacques Audiard, released in 2009. It follows the steps of Malik El Djebena, a young French man of Arab descent who is sent to prison after an altercation with a police officer. There, he soon finds himself under the wing of César Luciani, a veteran Corsican crime boss who recruits him to extend his grip in prison to the Muslim section. Malik's assignments will lead him deeper into the underworld as he works his way up through the ranks.

The film was critically acclaimed, earning many awards and nominations, including an Oscar nomination for Best Foreign Language Film. It stars Tahar Rahim as Malik and Niels Arestrup as Luciani, as well as Adel Bencherif, Reda Kateb and Hichem Yacoubi in supporting roles.