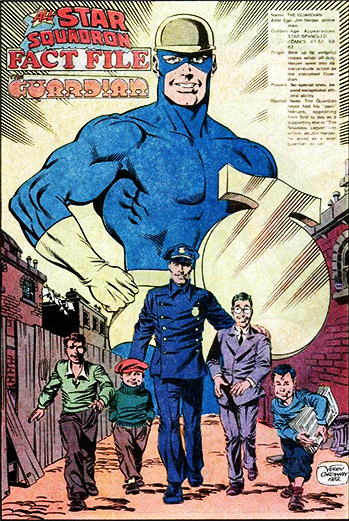 Guardian I, Officer Jim Harper, with the Newsboy Legion
Guardian is a DC Comics legacy hero the first of whom, Officer James "Jim" Jacob Harper, was created by Jack Kirby and Joe Simon in 1942.
Advertisement:

Jim Harper was a Metropolis city police officer whose beat was the downtrodden neighborhood of Suicide Slum. During WWII he donned a superhero costume to fight crime in a less rigid way after hours and joined the All-Star Squadron.

In his day job Officer Harper came across a group of four hooligans known as the Newsboy Legion and upon learning of their circumstances as a bunch of orphans trying to provide for themselves he got the judge to agree to allow the boys to become his wards rather than go to a juvenile detention center. All four of the boys quickly figured out Jim's secret identity though he denied their accusations of him being the Guardian for decades and only admitted the truth on his deathbed. The Newsboys did very well with a roof over their heads and an adult providing for them and all four of them ended up being important Cadmus employees and eventually directors of the government cloning program. On Jim's deathbed he gave them permission to clone him, though it's unlikely he realized just how many clones, and partial clones, containing his DNA would be running around in the near future.

Jim had two brothers and one sister, through whom he's got a several notable relatives living in the modern day. His great-nephew named Roy Harper is also known as Speedy, Red Arrow and Arsenal and is most commonly associated with the Teen Titans and Green Arrow. His great-niece Jamie Harper became a police officer herself and was Robin's point of contact on the GCPD before she moved to Metropolis. His youngest great-niece Roberta "Bobby" Harper becomes a member of the modern Newsboy Legion and ends up the legal ward of Jim's most prominent clone.

The second Guardian was Mal Duncan, who is better known as Herald and Vox for his portal opening horn and has strong ties to the Teen Titans, a team he was a member of several incarnations of. He used the Guardian identity along with powered armor before gaining Gabriel's Horn and was a handy member of the team given his boxing abilities and capacity for taking on leadership positions. Mal was the first African American to use the Guardian name. For more on Mal see here.

The third Guardian was a clone of the first, who was given implanted memories of the original and therefore had a strong relationship with the now adult Newsboy Legion upon his waking but had conflicting feelings about his status as a clone, and eventually requested that he never be cloned again. He serves as one of the chief security officers of Cadmus and the implanted memories given to him were added to enough to make him more subservient and less questioning of the project than original would have ever been even though is personality is otherwise unaltered. Pre-Crisis he went by the name Golden Guardian, but post-Crisis he was still just the Guardian.

The fourth Guardian was Jake Jordan, a former New York cop who was recruited by the Manhattan Guardian newspaper to be their official superhero, having bought the Guardian name during a period Cadmus was believed defunct. Further thematic links to the original were provided by the newspaper being known for its young "citizen journalists", called the Newsboy Army, and the editor being a former member of a kid gang called the Newsboys of Nowhere Street. The Manhattan Guardian was one of the Seven Soldiers who fought the Sheeda.

Following Flashpoint, a Cadmus clone Guardian named Michael made a brief appearance in Superboy (New 52) and the Earth-Prime version of Jake Jordan appeared alongside the other Soldiers in Sideways, but little has been revealed about either of them. The Earth-Prime Jim Harper debuted in Superman (Brian Michael Bendis), as a Metropolis street vigilante who is offered Leviathan membership; it is not known if he was still connected to Cadmus (which was destroyed in Leviathan Rising with all the other secret government groups).

For characters related to Guardian I see Superman – Supporting Cast, for Cadmus Personnel and the Newsboy Legion(s) see this character sheet. 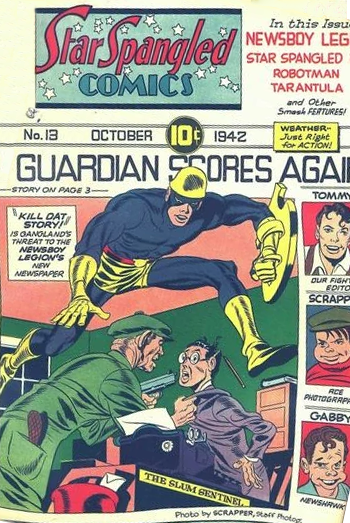 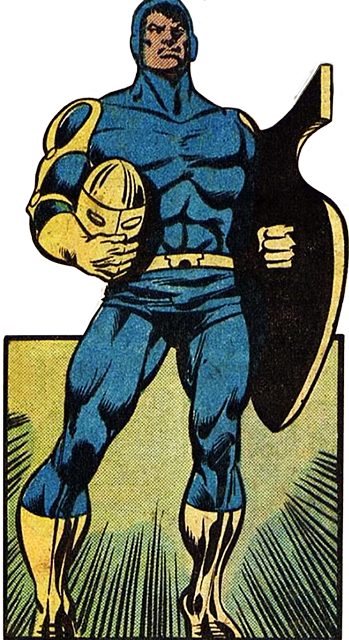 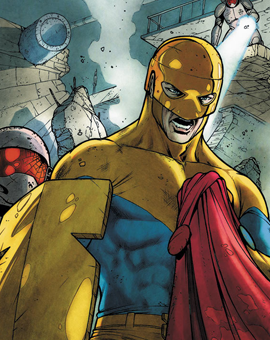 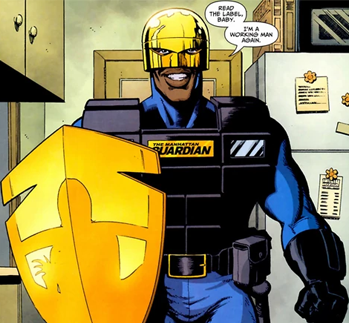