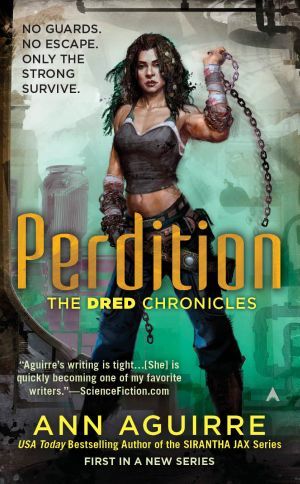 The Dred Chronicles are a series of Science Fiction novels by Ann Aguirre. They're set in the same universe as her earlier Sirantha Jax series - they feature a different protagonist, but also prominently feature a character from the original series.
Advertisement:

There are three books:

The books are set on a chaotic, lawless Prison Ship called Perdition, and focus on Dresdemona "Dred" Devos. Dred has the ability to psychically read the crimes of people she meets, and used it to go on a killing spree of people whose guilt she could sense but not prove. The authorities took a predictably dim view of that, and after being captured and sent to Perdition, she ended up overthrowing one of the gang leaders and taking his place — she's nicknamed the Dread Queen, a corruption (albeit a fairly apt one) of her nickname. Between rival warlords and the none-too-sweet natures of her "subjects", survival is... tricky. Into this walks Jael, a mysteriously hard-to-kill new prisoner who'll be familiar to people who read The Sirantha Jax Series. Dred and Jael form a mistrustful alliance, aimed initially at survival and then at escape.