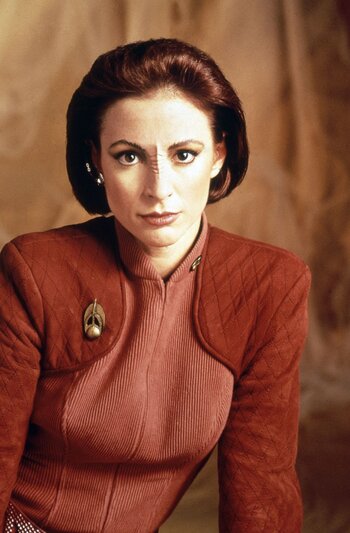 Played By: Nana Visitor
"Major, you've been breaking one too many for fourteen and a half years! Cardassian rules, Bajoran rules, Federation rules — they're all meaningless to you, because you have a personal code that's always mattered more. And I'm sorry to say, you're in slim company."
— Odo, "The Circle"

The most visible Bajoran and, at least initially, The Lancer, Major Kira of the Bajoran Militia was Sisko's second-in-command and the first officer of Deep Space Nine. She resented Starfleet's presence, thinking of Bajor as having swapped one set of occupiers for another. Grew up as a Bajoran freedom fighter and is thus skilled in guerrilla warfare, as well as capable enough to take on a Klingon in hand-to-hand combat. Begins her story arc angry and broken, but slowly defrosts over the course of the series. Kira is her family name and Nerys is her given name, said last as part of Bajoran naming custom (like Japanese names). 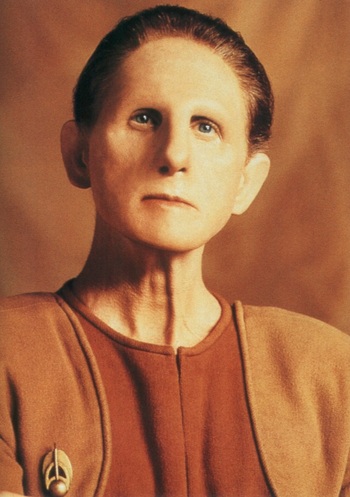 Played By: René Auberjonois
"You are the thin, beige line between order and chaos."
—Lwaxana Troi, "The Forsaken"

A shapeshifter (or "Changeling", a clever double-meaning) who serves as the ornery Chief of Station Security. His obsessive qualities make him something of a maverick; however he runs the station so smoothly that everyone, from Dukat's regime to the new management, winds up acceding to his territorial nature. Functions as The Spock initially, later becoming a judge. Originally a bit angsty over not knowing his origins; eventually discovers that his own people are the leaders of the Dominion and thus the enemy, which doesn't help with the angst one bit. While not particularly strong on manners or civil liberties, when it comes to impartiality, Odo's your man. 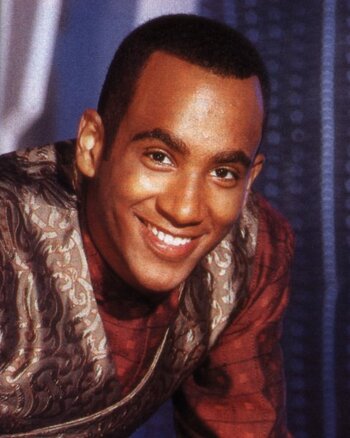 Played By: Cirroc Lofton, Thomas Hobson ("Emissary"), Tony Todd ("The Visitor")
Quark: Why can't you take after your friend here? He knows enough to stay out of Starfleet. Even a Hew-man can see there's a lot more profitable opportunities out there for a young man with ambition.
Nog: Uncle, he wants to be a writer! There's no profit in that!
— "Facets"

Benjamin Sisko's son. A rather inexplicable member of the main cast, but he was always in the starting credits, even when guys like Garak and Nog started featuring more than him, and he had a tendency to vanish for several episodes at a time. However, some of the most critically acclaimed writing and acting on the series were the Jake/Ben Sisko scenes. He blessedly avoided becoming another Creator's Pet, for the most part, via actually suffering sometimes, in his growth as a character; also showed the impressive insanity—sorry, testicular fortitude—to remain behind and try to be a journalist covering Dominion-occupied DS9. 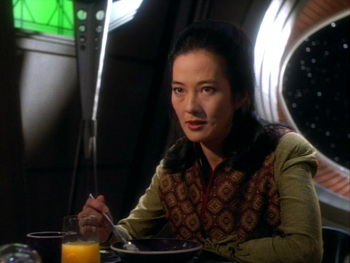 A Federation civilian and wife of Miles O'Brien. 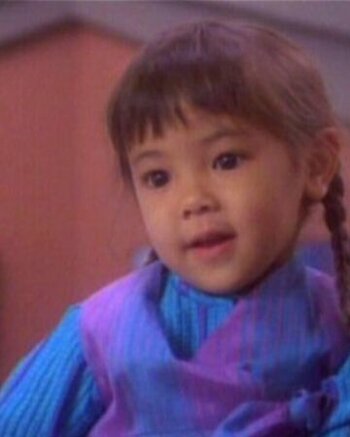 Miles and Keiko O'Brien's first child. Had the dubious honor of being delivered by Worf. Her baby brother, Kirayoshi O'Brien, is born under similarly weird circumstances. 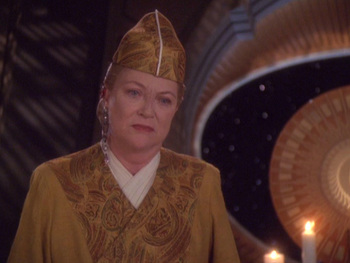 Played By: Louise Fletcher
"The Kai has always been the spiritual leader of Bajor, but Winn has to share that role with you. And to make matters worse, you're an outsider, a non-Bajoran. That's something she can never forgive you for."
—Kira, "The Reckoning"

A pearl-clutching religious leader. She is introduced as a generic fundie, but develops into a far more complex antagonist for the heroes. Ends up in Sinister Minister territory, but has a much less cartoonish motivation than the usual: she's genuinely religious but becomes steadily more and more bitter that her gods keep, as she sees it, favouring foreigners and dilettantes over her, despite her lifelong service to them. 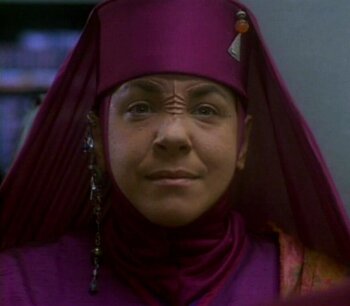 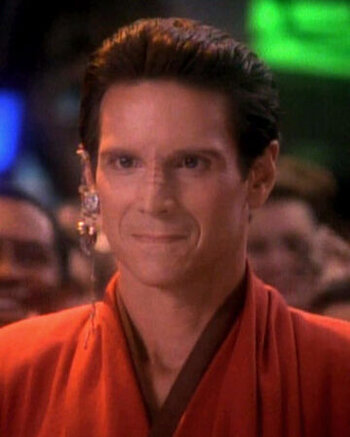 A serene but quite savvy cleric who aids the Federation, and a leading candidate for Kai. He and Kira fall in love and have a happy relationship until his death. 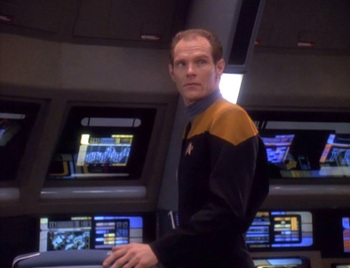 Played By: Kenneth Marshall
"People don't enter Starfleet to become commanders, or admirals for that matter, it's the captain's chair that everyone has their eye on. That's what I wanted when I joined up. You don't get to be a captain wearing a gold uniform."

Initially assigned to Deep Space 9 as Chief of Starfleet Security after first contact with the Dominion. This was done in part due to a lack of trust Starfleet Command had for Odo. 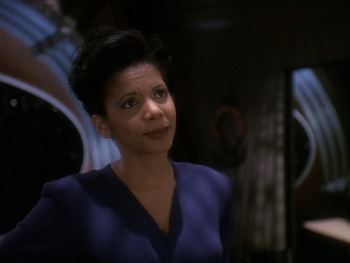 Played By: Penny Johnson
Sisko: I am a Starfleet officer — the paragon of virtue.
Kasidy: You're more like a parody of virtue.
—"For the Cause"

A freighter captain who is introduced to Ben by Jake, who thinks his dad needs to start dating again. She and Sisko hit it off quite nicely. Kasidy doesn't always see eye-to-eye with Ben and isn't afraid to tell him so, but they form a very strong relationship and eventually marry. 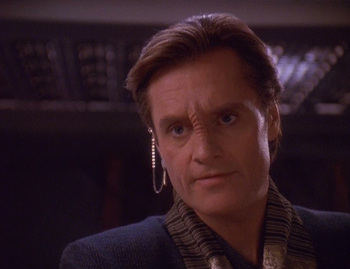 Leader of the eponymous Shakaar resistance cell during the Cardassian Occupation, and former comrade-in-arms of Major Kira. He became a farmer after the Occupation ended, and was eventually elected as First Minister of Bajor. 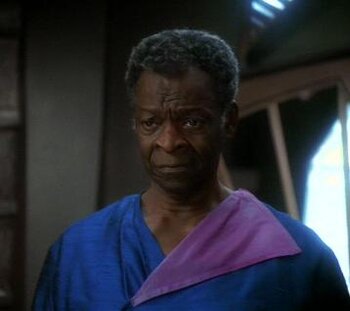 Sisko's father. Joseph Sisko is the owner of a very successful restaurant in New Orleans, which he is loathe to leave for any reason. He loves his son and grandson dearly and worries about them a lot. 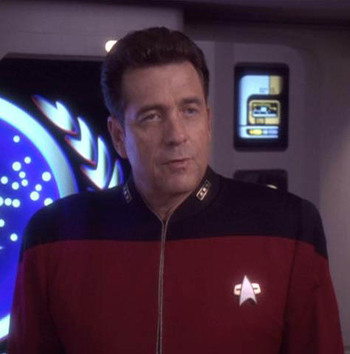 Played By: Barry Jenner
"I don't like it. But I've spent the last year and a half of my life ordering young men and young women to die. I like that even less." 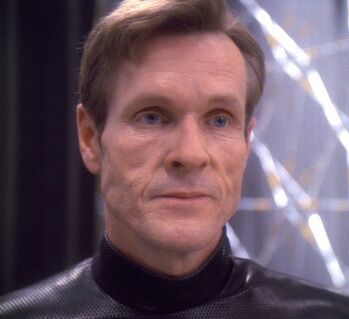 "I live in a world of secrets, of sabotage and deceit."
Played By: William Sadler
"The Federation needs men like you, doctor. Men of conscience. Men of principle. Men who can sleep at night... You're also the reason Section Thirty-One exists — someone has to protect men like you from a universe that doesn't share your sense of right and wrong."

An operative of Section 31, a clandestine black ops organization within the Federation and independent of Starfleet. Sloan and the others of his agency have dedicated their lives to eliminating threats to the Federation's survival by any means necessary, even if it means violating the very freedoms and principles that Federation citizens are supposed to hold dear. 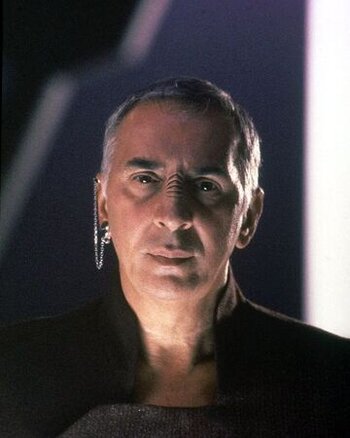 A Bajoran and the leader of the terrorist group the Alliance for Global Unity, better known as the Circle. 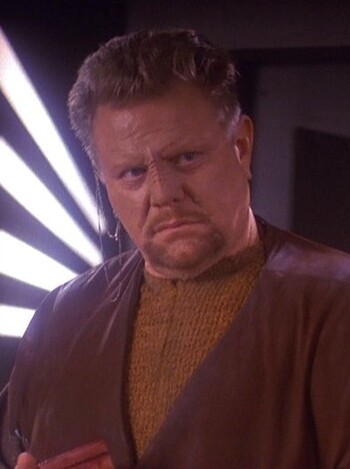 A former Bajoran freedom fighter who served alongside Kira. 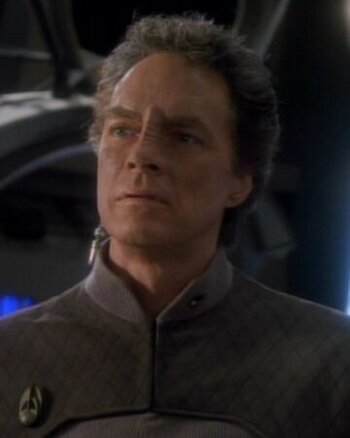 A legendary war hero and resistance fighter who, in reality, had all of his victories either falsely attributed to him or exaggerated, something that gives him no end of grief. 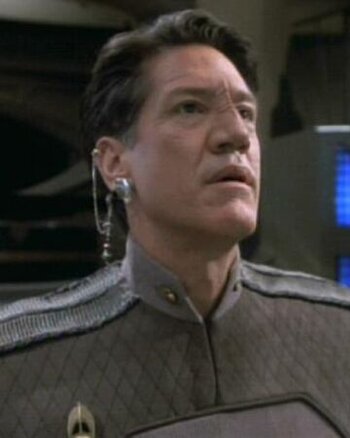 The commander of the Bajoran military who is secretly in league with the Circle. 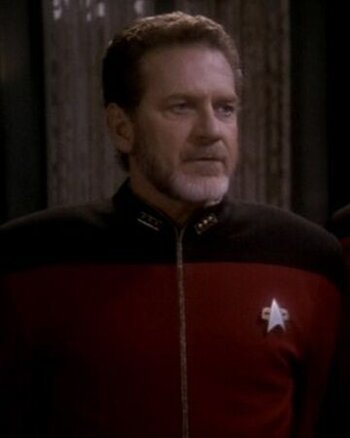 Sisko's former captain, now an Insane Admiral who leads a conspiracy to cause a military takeover of Earth. 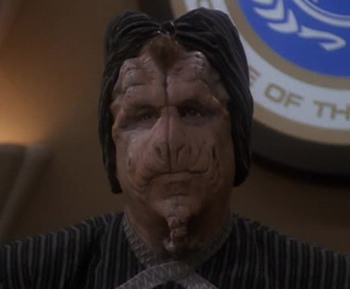 The president of the Federation.

An enigmatic race of non-corporeal beings who live in an extratemporal dimension contained within the Bajoran wormhole.