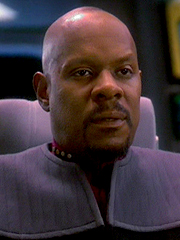 Played By: Avery Brooks
"So you're the commander of Deep Space 9. And the Emissary of the Prophets. Decorated combat officer, widower, father, mentor and... oh, yes, the man who started the war with the Dominion. Somehow I thought you'd be taller."
— Senator Vreenak, "In the Pale Moonlight"

The Captain (though actually only ranked Commander until late Season 3), with a touch of the Warrior Poet when considering his reasons for helming the titular station. Prior to the series, Sisko became a widower following the infamous Wolf 359 incident (TNG) and was left adrift with a young son, Jake. He briefly considered resigning from Starfleet, but was instead saddled with the task of admitting Bajor into the Federation. Following a chance encounter with entities living inside the Bajoran Wormhole, Sisko is reluctantly anointed as the Emissary, their corporeal agent and a religious icon to the Bajorans. With that title comes the responsibility of holding Bajor together long enough for the planet to be inducted into the Federation: with the Cardassians gone, the planet is spiraling down the path of sectarian warfare, and any number of opportunistic races are waiting to pick the pieces if Sisko fails. The only Trek Captain with a stable family unit, his relationships with Jake, Joseph, and Kasidy Yates-Sisko play a small but significant role in his handling of the Dominion crisis. Also grows his own peppers and plays jazz piano, by the way. 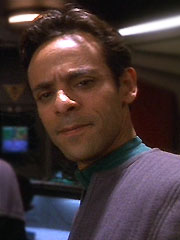 Played By: Siddig El Fadil a.k.a. Alexander Siddig
"I didn't want some cushy job or a research grant, I wanted this! The farthest reaches of the galaxy; one of the most remote outposts available. This is where the adventure is! This is where heroes are made!"
— "Emissary"

Thrill-seeking newcomer who believes he's God's gift to medicine; life on the station would shatter that notion pretty quickly. Started off alternatively being droolingly infatuated with Dax, painfully green, and generally coming across as Lieutenant George IN SPACEprattling eagerly about frontier medicine and generally getting up the nose of anyone unfortunate to be nearby. Later his behavior gives way to some dark personal secrets.

The showrunners weren't sure what to do with Bashir in the beginning, having rather off-handedly written a doctor into the show. Negative viewer response to the character only emboldened the writers to make Bashir a fan favorite; in this rare case, it worked. Notable as the first time that a U.S. TV show recognized that not all English people are white. 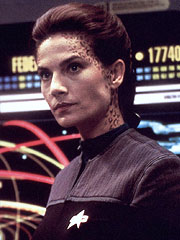 The Chick, Really 700 Years Old (and the Action Girl sometimes), with the slight twist of being an attractive young female - albeit one inhabited by a symbiont with several centuries of memories and experience from hosts of both genders. Some fans claim she mutated into a Faux Action Girl after she got together with Worf, although she first showed her proficiency with the bat'leth in Season 2. For Season 7, she is replaced by Ezri Dax who is not at all similar. Luckily, her species had a built-in storyline reason that made this possible; symbionts need new hosts on occasion after all, and the joining adds the new personalities to the mix. For the hosts of the Dax symbiont beyond Jadzia and Ezri, scroll to the bottom of the page. 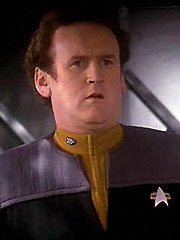 Played By: Colm Meaney
"Weren't you one of the little people?"
—Q, "Q-Less"

Easily the most overworked person on the station, and an Ascended Extra from Star Trek: The Next Generation who enjoys a bigger role this time. His family gets more screentime as well, with his wife Keiko opening a primary school on the station (and running afoul of Kai Winn for her secularist slant). Subject of the annual "O'Brien Must Suffer" writers' in-joke. The only non-commissioned officer in the franchise to be a main character, he can easily be mistaken for the only one in the service. (The others were mostly very minor roles

, dutifully enumerated on other wikis.) In the novelization of the pilot episode, O'Brien is slightly altered — he accepted a promotion to Ensign and was no longer a noncom when the story began.

A note for trivia buffs: both he and Worf were present in the series premiere (and series finale) of TNG, and hold the records for "Appeared In The Most" (or "2nd Most" in O'Brien's case) "Episodes Of Star Trek Ever." (Majel Barrett Roddenberry, whose voice "appears" as the Federation computer's for something like 250 episodes, holds a different record.) 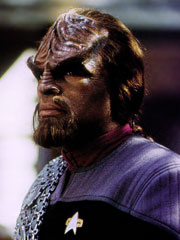 Played By: Michael Dorn
Worf: I have a sense of humor. On the Enterprise, I was considered to be quite amusing.
Dax: That must've been one dull ship.
— "Change of Heart"

Another reassignment from the Enterprise-D, turning up with the show's Retool at the start of Season 4. Notably, Worf suffered less of The Worf Effect on this show than The Next Generation. The conflicts of this series and heavy involvement with the Klingon Empire were more suited to his strengths and instincts. In addition, Michael Dorn was savvy enough to ensure that, should he be invited onto another series, he would be both unique among Klingons and would have a chance to be badass. Hence his fondness of Prune Juice over Blood Wine. See also his section on the Star Trek: The Next Generation character sheet. 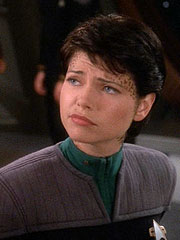 Played By: Nicole de Boer
"She's a Dax. Sometimes they don't think, they just do."

The new Trill host for the Dax symbiont, owing that only to chance. Ezri Tigan was serving on the ship taking Dax back to Trill when the symbiont became extremely ill and the only way to save its life was immediate implantation in a new host. As the only Trill onboard, Ezri reluctantly volunteered, and her unease at being a "joined" Trill, which was something prospective hosts are supposed to train for years to deal with, became a centerpiece of her character. She also had to deal with Dax influencing her feelings about Worf and Bashir, her own attraction to Bashir, and the fact that an officer of her general inexperience — specifically, a Lieutenant Junior Grade Assistant Counselor — was suddenly part of the Federation's front-line wartime command crew. At least she's cute. For the hosts of the Dax symbiont beyond Jadzia and Ezri, see the "Others" folder.

The Dax Symbiont
A famous (and infamous to some) Trill symbiont. Its hosts before Jadzia are detailed below.

The Dax symbiont's fourth host. A politician and a loving mother.

The Dax symbiont's fifth host. A carefree pilot who died in a shuttle accident shortly after being joined.

The Dax symbiont's seventh host. An ambassador and ladies' man, as well as an old friend of Sisko's.

A Trill who was passed over for receiving the Dax symbiont, an event that ruined his life. He takes over Deep Space Nine during "Invasive Procedures" so he can take Dax from Jadzia.

A host of the Dax symbiont from the alternate timeline seen in "Children of Time". 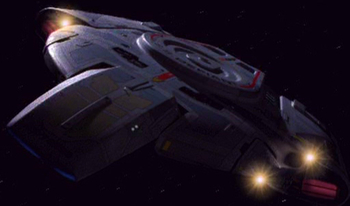 A prototype "escort" ship developed by Starfleet (i.e.: Ben Sisko) after the disastrous Battle of Wolf 359, she was pulled out of storage and posted at Deep Space Nine after first contact with the Dominion. She was called an "escort" because that was the most polite term Starfleet could find for their very first dedicated warship. Although she had a rough start, the Defiant managed to show just how fierce the peace-loving Federation could be.

Her service came to an end when the Breen entered the Dominion War and one-shot her with their energy weapon. Starfleet Command posted her sister ship Sao Paulo to the station and gave special permission to rename her to Defiant. 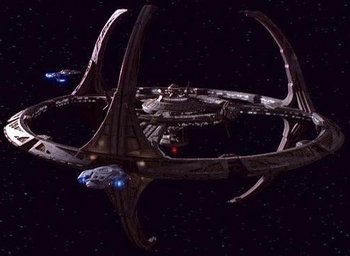 Formerly Terok Nor, the Cardassians' deep space station over Bajor, she was taken by the bajorans once the Bajor occupation was ended. In turn the Bajoran made a deal with the Federation that saw the Bajoran station be administered by Starfleet as part of an alliance between both powers.