Literature / A Batalha Do Apocalipse 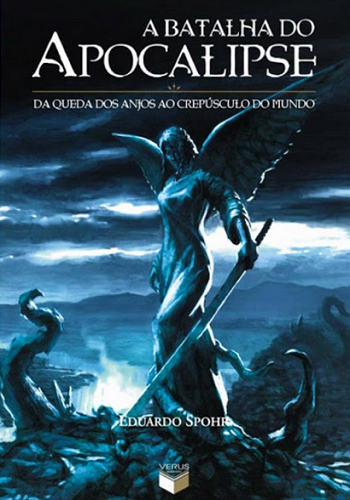 20 Minutes into the Future, Rio de Janeiro. A man stands atop the Cristo Redentor as two other men aproach him. They're all Angels and the two are there to question the first one what side he's taking in the oncoming End of the World as We Know It. The novel then intervenes the adventures of Ablon, a Fallen Angel who rebelled against the Archangels and for it was sent cast down, from his first meeting with the human Shamira in ancient Babylonia to the European Middle Ages and the preparations for the oncoming Apocalypse in the present.

This 2010 novel by Eduardo Spohr takes influences from Abrahamic Mythology, High Fantasy Literature, Pop culture movies and literature and anime. It's currently been published in Brazil, Portugal, Holland and is in negotiation for publication in Mexico. It was forbidden in Italy due to making some rather interesting views of some important religious figures. Currently, the author is writing a prequel-of-sorts trilogy with different protagonists.

Following ABDA sucess, Spohr then published three more books that share the same universe than the first: The Filhos do Éden (Children of Eden) trilogy: Herdeiros de Atlântida (Heirs of Atlantis; 2011), Anjos da Morte (Angels of Death; 2013) and Paraíso Perdido (Lost Paradise; 2015). The protagonists of this trilogy are the angels Kaira, the Divine Spark and Denyel, the Exiled Cherub.

In 2016, Spohr and the illustrator Andres Ramos published a large encyclopedia of the Spohrverse, called Filhos do Éden: Universo Expandido (Expanded Universe), which contains detailed information about everything: the whole cronology (since the beginning of time until the Apocalypse); important places and the different planes of existence; the angels and demons divisions (castes and orders); information about the characters in the tetralogy; a chapter exclusive to the magic systems; a bestiary; a chapter for those who want to write fanfictions and a chapter exclusive for RPG settings, using the D&D 5th edition.