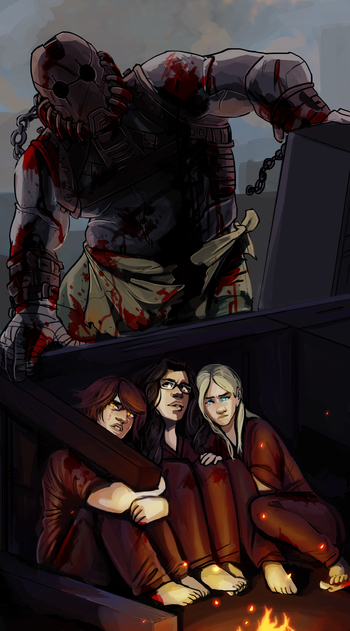 Mimi and Elle were my friends, and saving friends was what heroes did. I wasn't going to let my friends die. I'd look after them. Picture done by JiinseyDesigns

"Nobody likes it here. About one in every five doctors might be here to help the patients, the rest are here to study the patients.
But you know what? You need this, we all need this. We have to try. It’s not going to be easy, it's not going to be pleasant. It's not going to be fun, or about making friends; or even, hell, escaping—though all of those might happen. Who knows?
Advertisement:
Being here is about one thing, and it’s the most important thing of all: ‘‘getting better’’ ."

is a Worm fanfic by Racheakt

. Original drafts began on the Spacebattles forums in 2015, with the story proper following suit in 2017.

In addition, the author has posted notes addressing some plot points and world-building that are not directly engaged in-story

Where many Worm fanfictions are about spectacle and others are about some kind of proxy revenge, Bird takes a more nuanced perspective. The story contrasts many of the themes in Worm. In place of physical and authoritative threats, there are a series of emotional and mental threats. Where Worm was about ever-increasing spectacle, Bird is about subtlety.

The result is the contrast between an Action Flick and a Psychological Thriller.

It can be found at AO3