Recap / Doctor Who S38E9 "Ascension of the Cybermen" 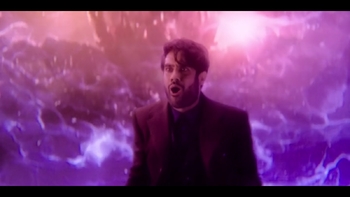 The Master makes a good entrance. Sadly for him, it doesn't top spending 4.5 billion years punching the way back to Gallifrey.
Advertisement:

The one where the canon is on the verge of an "upgrade".

In the far future, the Doctor and her companions track down a small group of human survivors from the CyberWars. As they try to protect them from forces led by the Cyberman fanatic formerly known as Ashad, the Doctor and her "fam" are split up, as are the survivors, trying to get to Ko Sharmus, where the Boundary that will allow the humans to escape this galaxy awaits.

In the past, a childless couple in early 20th century Ireland adopts an abandoned baby boy they name Brendan, who grows up to join the Gardaí as he wants to make a difference in his community. However, there's something unusual about him, as he survives getting shot and falling off a cliff by a robber he was trying to talk down, with no broken bones and the bullet not even penetrating his skin. He lives to old age and retires, only to be confronted by his adoptive father and the police officer who was there the day he was found, with the both of them the same age they were when he joined the Gardaí. They take him to a back room, where they restrain him in a chair and hook him up to a device that shocks him as they tell him he'll have to forget... again...

Graham and Yaz end up stuck on an old Cyber Carrier still housing a sleeping army as Ashad pursues them, reactivating the army and turning it to his own purposes. The Doctor, Ryan and a survivor named Ethan make it to Ko Sharmus in a stolen ship to see the legendary Boundary, only for the portal to lead to the ravaged Gallifrey after the Doctor opens it. And who should fall out but her greatest enemy, who declares that everything is about to change...