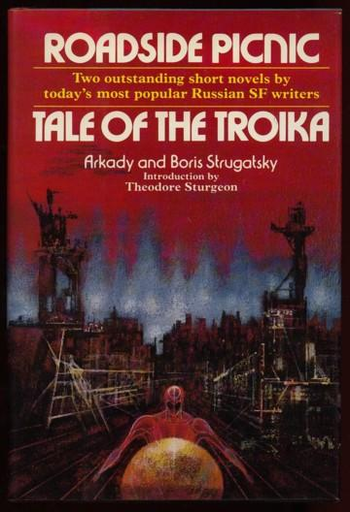 Some cultures believe the Earth is really a giant turtle. Meet the plastic sixpack holder.
Pilman: Imagine a picnic. Picture a forest, a country road, a meadow. A car drives off the country road into the meadow, a group of young people get out of the car carrying bottles, baskets of food, transistor radios, and cameras. They light fires, pitch tents, turn on the music. In the morning they leave. The animals, birds and insects that watched in horror through the long night creep out from their hiding places. And what do they see? Gas and oil spilled on the grass. Old spark plugs and old filters strewn around. Rags, burnt out bulbs, and a monkey wrench left behind. Oil slicks on the pond. And of course, the usual mess — apple cores, candy wrappers, charred remains of the campfire cans, bottles, somebody's handkerchief, somebody's penknife, torn newspapers, comics, faded flowers picked in another meadow.
Advertisement:
Noonan: I see. A roadside picnic.
Pilman: Precisely. A roadside picnic, on some road in the cosmos.

A novel by the Strugatsky brothers.

Roadside Picnic (Пикник на обочине) focuses on the Zones of Alienation, where debris and items left behind by visiting extraterrestrials are concentrated. These Zones are filled with bizarre anomalies and physics-defying objects, ranging from the Sun appearing to stand still all the time to two pieces of metal that forever repel and attract each other. Needless to say, scientists and collectors pay hefty prices to acquire the objects, but access to the Zones, which are deadly enough in their own right, is strictly controlled by the United Nations.

This is where the Stalkers come in — illegal intruders who brave the patrols and the dangers of the Zones to bring back the artifacts for sale and study. The story focuses on one particular Stalker, named Redrick "Red" Schuhart. His life is dominated by the Zone and the thriving black market in the alien products. Even the nature of his daughter has been determined by the Zone. And it is for her that Red makes his last, tragic foray into the hazardous and hostile depths.

Roadside Picnic has been loosely adapted to film in 1979 by Andrei Tarkovsky as Stalker. Both the book and the movie have inspired the STALKER game series. A licensed Tabletop RPG (based on the book) called Stalker: The Sci-Fi Roleplaying Game published by the Finnish Burger Games was released in 2008, with an English translation released in 2012. And the concept of "stalkers" and "zones" spread far beyond the Strugatsky brothers, appearing in series like Metro and Mutant: Year Zero and even being embraced in real life by scavengers around Chernobyl (and its Exclusion Zone) and similar areas. You really can hire a stalker to sneak you to Pripyat illegally.

A final interesting lexical note — "stalker" is not a translation. The Brothers really liked the English word "stalker" and transliterated it into Russian. But since they didn't speak English well at the time, they mispronounced it "stahl-ker" rather than "staw-ker", and it remains pronounced so in Russian-language works like the film and games. And of course "stalker" here means "somebody moving slowly and carefully, constantly expecting trouble", not "somebody who obsessively follows and harasses another".

"HAPPINESS FOR EVERYBODY, FREE, AND NO ONE WILL GO AWAY UNSATISFIED!"