Literature / The Queen of Spades 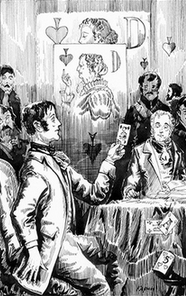 A brilliant short-story about a card gambler, by the Russian poet and writer Alexander Pushkin.

The story tells of Hermann, an ethnic German officer in the Imperial Russian Army, who has never participated at the gambling tables despite living off a decent sum of money. However, when he hears from an acquaintance the story of a Countess who somehow won back the fortune she lost at a faro (a gambling card game) in France with the secret of the three winning cards learned from the notorious Count of Saint-Germain, he takes an immediate interest.

Obsessed with gaining the secret for himself, Hermann plots out a way to get access to the Countess through her ward Lizaveta. When he does reach and accost the Countess, demanding her secret, things don't go to plan when fright kills her. But days later, after her funeral, he is visited by her ghost who tells him the secret three cards - three, seven and ace - and tells him to play once each night on the condition he marry Lizaveta.

Armed with the knowledge, Hermann takes his chance at the gambling table, where his success or failure will be decided by the three cards...

It has been adapted into opera and films, most notably the 1949 British film by Thorold Dickinson, starring Anton Walbrook.

Tropes provided by The Queen of Spades: