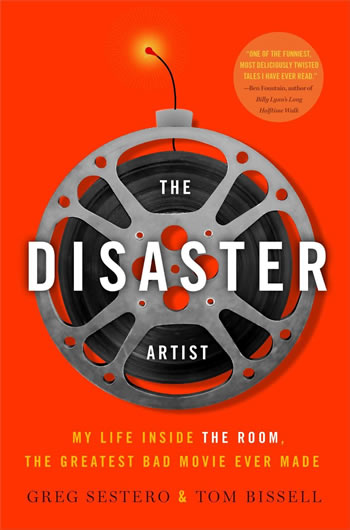 This is my life.
"Haha. What a story, Mark."
— Johnny (Tommy Wiseau), The Room
Advertisement:

In 1998, nineteen-year-old Greg Sestero was yet another young man with the dream of making it in Hollywood. During an acting class he noticed one of his classmates: a very strange man with an undefinable accent who was clearly unsuited for acting yet didn't seem to be embarrassed by it. Very quickly, he found the man's scenes to be both painful to watch yet highly entertaining. On a whim, Greg approached him and asked if he wanted to do a scene with him. Though clearly taken aback at this spontaneous act of interaction, the man agreed.

That man was one Thomas "Tommy" P. Wiseau, who avoided questions about his background. Little did Greg know that Wiseau would change his life forever, especially when the latter began work on what he saw as his magnum opus — a romantic drama called The Room... and boy, was it a magnum opus for all the wrong reasons.

The Disaster Artist: My Life Inside The Room, the Greatest Bad Movie Ever Made is a 2013 book written both by Sestero and Tom Bissell, chronicling not only the events behind the production of The Room but also Sestero's unlikely friendship with Wiseau.

James Franco directed a film adaptation of the book which was released in 2017. Tropes relating to that film should go here.

Now available as an audiobook

, read by Greg himself. And yes, he does a Tommy Wiseau impression.

, a comic book about Philip Haldiman's (Denny) experience. Compare Growing Up with Manos: The Hands of Fate: How I was the Child Star of the Worst Movie Ever Made and Lived to Tell the Story, another self-published memoir by an actor (Jackey Raye Newman Jones) that starred in one of the most famous So Bad, It's Good movies of all time (Manos: The Hands of Fate).

"It seems to me like you're an EXPERT, Mark."