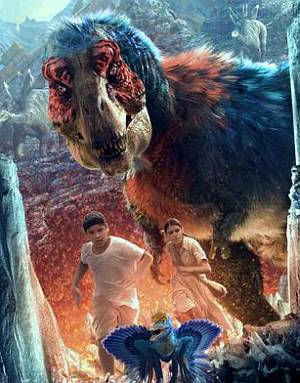 Pictured: Boy from the 2010s, girl from the 1950s, feathered dinosaurs.
Advertisement:

Dinosaur Island is an Australian 2014 film.

Lucas, a boy from 2014, ends up magically transported onto a strange island where the only human inhabitant he can find - at least at first - is Kate, a girl from 1955. The island appears to be beyond time and space, with its strange ability to pull in airplanes while seemingly vaporizing their passengers, its large number of dinosaur and killer plant inhabitants, and the inability to communicate with the outside world.

Combining their skills and knowledge together, the two must work together to find a way to escape. Fortunately, Lucas is a math and science genius, and Kate is a survivalist and a dinosaur and plant specialist.

The island itself is home to more than dinosaurs, but appears to be an oddly supernatural place featuring everything from magic crystals and a tribe of African boys to dinosaurs and plane wrecks that somehow have no people inside.