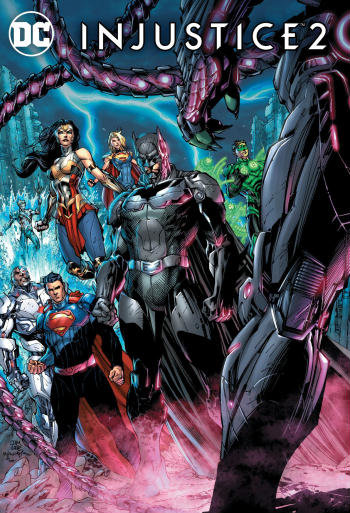 A comic book series based on the videogame of the same name, written by Tom Taylor, with art by Juan Albarran and Bruno Redondo. The series began on April 11, 2017, and provides the Back Story for the game, bridging the gap between it and the previous game.

In an alternate version of the DC Universe, Superman went mad following the death of his wife and child at The Joker's hands and proceeded to break his rule to never take a life by murdering him and established a totalitarian government where he ruled Earth with an iron fist, intending to not let the same tragedy to happen again. This new Regime enlisted several superheroes to enforce his will, and anyone who dared to stand up to him would be summarily executed - not even other heroes were safe from their wrath. Batman and his few allies were among those who resisted him for a grueling five-year-long campaign until he was forced to summon alternate versions of superheroes of his world in order to dethrone the Regime and free the Earth. They succeeded when a still heroic Superman was transported to the Injustice Earth to beat its tyrannical High Councillor. Now, the Injustice version of Superman is behind bars alongside his collaborators and very few heroes are left to rebuild the world following the Regime's fall. Unfortunately, old enemies begin to emerge from the shadows to fill the void and begin terrorizing the world, and Batman must do whatever in his disposal to save the planet while remaining firm to the values he upheld when half the Justice League forgot them.

The comic ran for 72 issues, along with a special annual that detailed Wonder Woman's backstory, explaining why this version of her is much more cold-hearted than the main Diana, and a second annual as a finale to the comic series.

Check Injustice vs. Masters of the Universe, a related publication that serves as a sequel to the game.