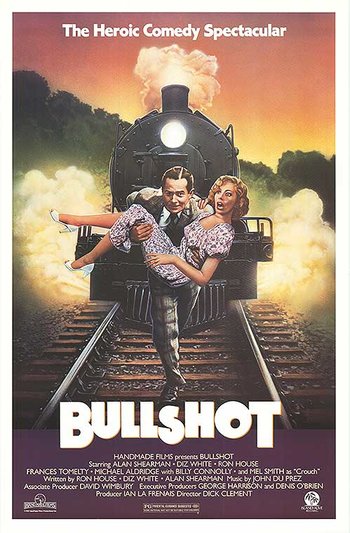 "There was a time when heroes were straight-limbed, lantern-jawed, well-bred, and British!"
— From the trailer
Advertisement:

Bullshot is a 1983 film adaptation of the play Bullshot Crummond, which parodied 1930s British heroes like Bulldog Drummond and Biggles. The film was written by and starred Ronald E. House, Diz White, and Alan Shearman.note The original play had two additional co-writers and co-stars, John Neville-Andrews and Derek Cunningham, who were not involved in the film. The main characters are:

(Note that this page has nothing to do with the video game publisher practice of releasing doctored screenshots as "gameplay" screenshots - such screenshots are often referred to as "bullshots".)

The film homages and spoofs numerous tropes of the genre, including: