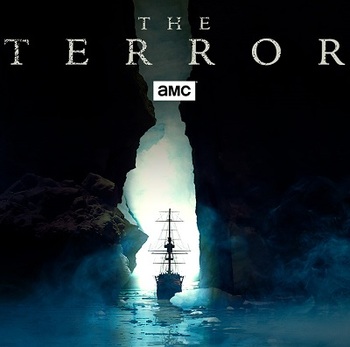 "This place wants us dead."
In 1845, two Royal Navy ships left England in an attempt to finally discover a navigable passage through the Arctic. They were the most technologically advanced ships of their day.
They were last seen by European whalers in Baffin Bay awaiting good conditions to enter the Arctic labyrinth.
Both ships then vanished.
Advertisement:

The Terror is a ten-part TV miniseries by AMC, based on the best-selling novel by Dan Simmons. It's a fictional account of Franklin's lost expedition

, in which 129 officers and men set off in 1845 to find the "Northwest Passage" to the Pacific Ocean through the Canadian Arctic, and were never seen again.

Two ships, the Real Life Royal Navy polar exploration vessels HMS Erebus and HMS Terror, venture into uncharted territory. The commander of the expedition, Sir John Franklin (Ciarán Hinds) is blithely confident that the expedition will make it through the ice and through the Bering Strait to warm water in the Pacific. He is supported by the acting captain of the Erebus, the Glory Hound Commander James Fitzjames (Tobias Menzies), whose self-styled swashbuckling bluster belies that he is a Naïve Newcomer to anything of this scale. The captain of the Terror, the far more cynical Capt. Francis Crozier (Jared Harris), who is also an experienced Arctic explorer, consistently points out the extreme dangers of the Arctic and the recklessness of Franklin's actions, but both Franklin’s stubbornness and Crozier’s own weakness for the bottle and abrasive personality lead to his warnings falling on deaf ears.

Events prove him right, as a series of disasters unfold. The ships are trapped in the Arctic ice, and they remain trapped when the ice never thaws in the summer of 1847. Supplies start running low. Worse, much of their food turns out to be contaminated (inefficient preservation and high levels of lead). And still worse than that, a supernatural monster, a gigantic bear with a humanoid face that the local Netsilik natives call the "Tuunbaq", is stalking the crew. Eventually, as the horrors of scurvy and starvation start to loom, conniving caulker’s mate Cornelius Hickey begins a slow mutiny based on relentless, brutal survivalism, and Crozier and Fitzjames are forced to set aside their differences to try to keep their men alive as some begin to turn on each other and others form deep, trusting bonds in the face of certain death.

Ridley Scott was an executive producer.

Not to be confused with the 1963 horror film directed by Roger Corman.