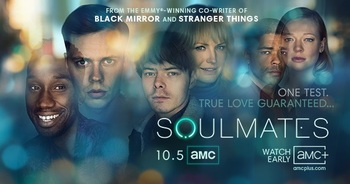 Soulmates is a 6 Episode anthology series on AMC which explores a world where a company has created a test to determine perfectly who a person's soulmate is.

In 2023 the "Soul Particle" was discovered and a company called Soul Connect set up shop with a test which could determine who a person's soulmate is so long as both of them have taken the test. The thing is, the test actually works.