The cast of Shadow Raiders. 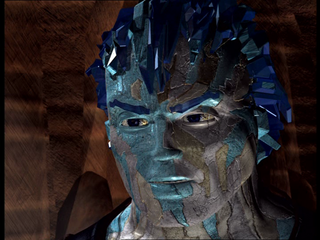 The Protagonist; an ex-quarrior-turned-miner who finds himself thrust into a leadership role when the Beast suddenly invades the system. In order to build an alliance to stand against the invaders, Graveheart needs to convince the four civilizations of the Cluster to set aside their bitter feuds and work together. It's not easy. 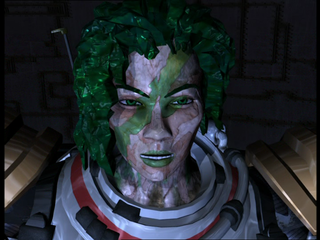 Voiced by: Enuka Okuma
"I'm only a soldier. I follow orders."

Captain of the Guard and Graveheart's childhood friend, Jade leads the quarriors on behalf of Lord Mantle, though quickly becomes an important member of The Alliance. 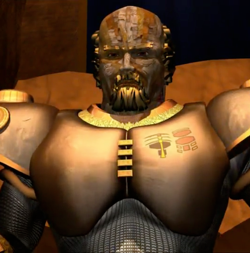 Voiced by: Blu Mankuma
"I have the strongest planet! The strongest warriors! We will win, or we will die fighting!"

The stubborn and aggressive ruler of Planet Rock, Lord Mantle believes his people to be the dominant civilization of the Cluster, and harshly punishes anyone who contradicts this view. He initially objects to the idea of forming an alliance with the other races; and even after the Beast Planet itself appears, Mantle is convinced that his quarriors and battle-moons are more than capable of repelling the invasion on their own. 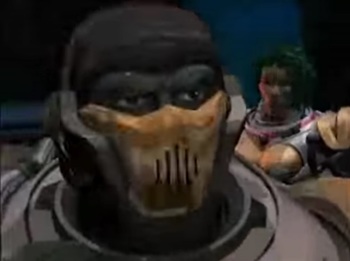 "Null-matter bound by a genesis matrix?"
Voiced by: Alec Willows

A high-ranking quarrior beneath Jade. 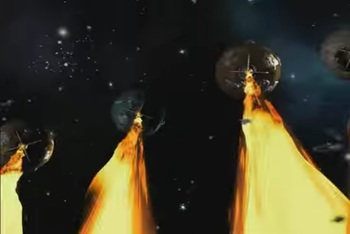 Dear child, once upon a time, there were five.
Planet Rock's first line of defense, and the most powerful weapons in the Cluster. 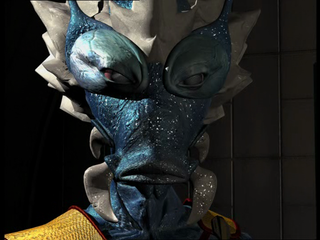 Voiced by: Mark Oliver
"You can count on Ice to be the first to stand by your side."

The stoic King of Ice, Cryos is an intelligent, noble ruler who witnesses the first Beast attack alongside Graveheart. Immediately understanding the threat posed by the Beast Planet, Cryos is the first to pledge his support to the idea of an alliance, though he still has trouble putting up with the likes of Mantle and Femur. 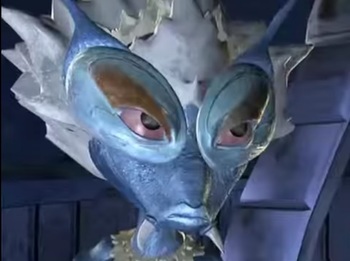 If she makes this face, run.
Voiced by: Tegan Moss

The daughter of King Cryos, Zera is a headstrong young girl convinced that she has every right to venture into harm's way to help her friends, much to the dismay of her father. 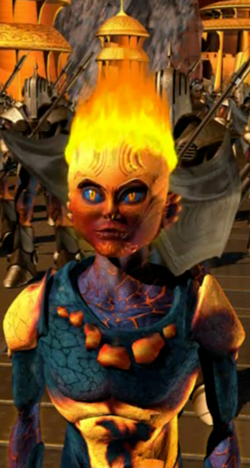 Voiced by: Matt Hill
"I'm the prince! I can do what I want!"

The young ruler of Planet Fire, Pyrus is adventurous, headstrong and quite happy to flaunt the age-old traditions and prejudices of his people, though he still aspires to be a leader worthy of his homeworld. His often-reckless behavior is mostly kept in check by his Grand Vizier, though they have conflicting opinions regarding the Alliance. 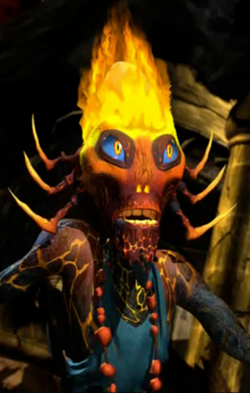 The highly protective royal advisor of Prince Pyrus, the Grand Vizier is quite vocal of his distrust of the Alliance and their motives, and looks for any excuse to deny or reject them. However, his paranoid complaints are quickly shut down by Pryus. 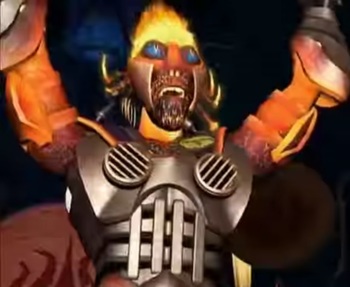 As seen in the opening for Season 2
Voiced by: Michael Dobson
"Talk all you will, worm! Nothing can rrruin this day!!"

The proud captain of Pyrus' royal guard, Blaze's grief and anger over the loss of his homeworld drives him and his men to hijack one of Rock's battle-moons, intending to attack the Beast Planet directly. 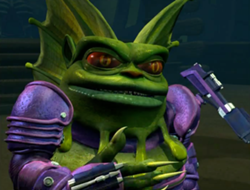 The cowardly ruler of Planet Bone, Femur is self-serving to a fault and always looking for ways to strengthen his position, often at the expense of his so-called 'allies'. However, his repeated backstabbing is mostly tolerated thanks to Bone's monopoly on the Cluster's food production. Often alternates between being suicidally dumb and unexpectedly wise. 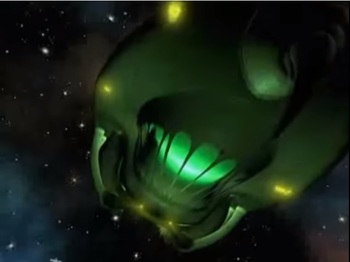 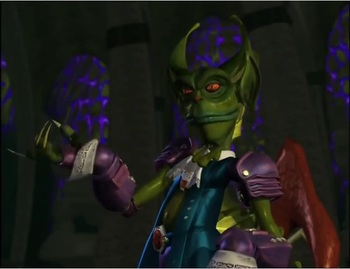 Your Voluminousness, it is truly astounding how you've inexplicably managed to survive the whole series!
The even more cowardly vassal of Femur. Pelvis is scheming, spineless and ultimately harmless. Firmly believing in Bone's creedo of "You kill it you bought it", he tries to comically off Femur at every opportunity. Thankfully (or not) Femur is always one step ahead.
Sternum 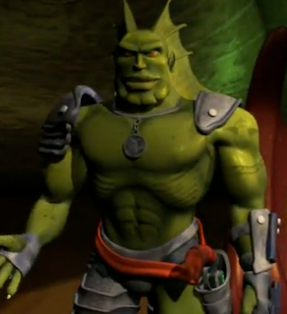 The leader of one of the two criminal gangs fighting each-other for control of the Prison Planet, Sternum is none other than the older brother of Femur, who was usurped and stranded on the Prison Planet by his craven sibling. 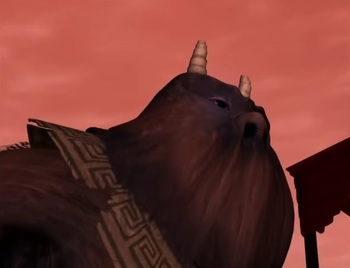 "No language or culture?" Indeed.
Voiced by: Ellen Kennedy
Ramset 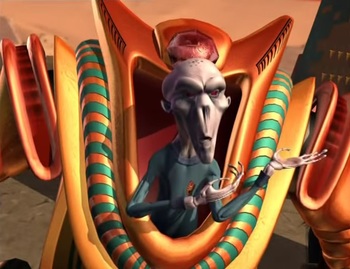 The unseen monstrous evil that drives the very Beast Planet and creates legions of demonic drones to do its bidding. 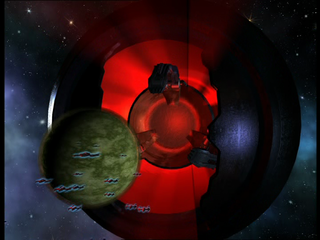 An immense, mechanical being that sustains itself through the aggressive consumption of smaller planetoids, the Beast Planet is able to create antimatter constructs of variable sentience to serve as minions and heralds. Virtually nothing is known about the planet or its origins, but it invades the Cluster with an almost single-minded desire to feed. 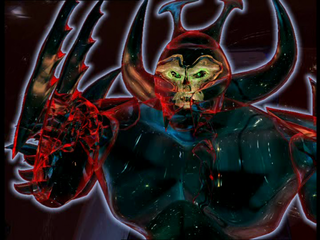 Voiced by: Scott McNeil
"Attack, my drones! Show them no mercy!"

Commander of the Beast Planet's military forces, Blokk is a brutish, bloodthirsty general who subscribes to the notion of overwhelming force in place of the complicated schemes put forward by Lamprey. 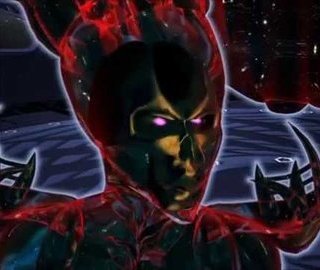 Voiced by: Tasha Simms
"I do so love it when a plan comes together!"

A manipulative servant of the Beast Planet that specializes in sabotaging planetary governments and tricking them through false diplomacy. She often butts heads with Blokk, who commands their military forces and naturally prefers a more straightforward approach. 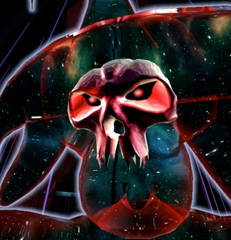 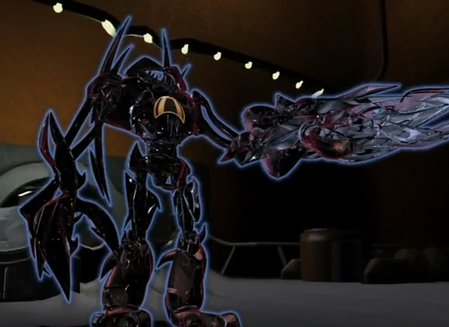 Creatures made of null-matter shaped by a genesis-matrix, the Drones serve as the Beast Planet's minions and military force. Possessed of only rudimentary sentience, Drones are nearly infinite in number and Nigh-Invulnerable - The only way to kill a drone is to destroy the fragile genesis-matrix inside their chests, causing the unstable null-matter to implode. 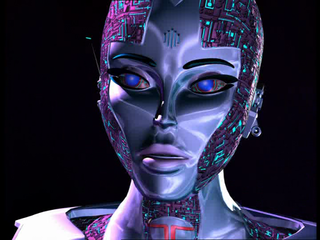 Voiced by: Donna Yamamoto
"Promise me, man of stone: Complete my mission. Warn the planets of this system. Stop the Beast Planet."

The Sole Survivor of Planet Tek, and the previous star-system to fall prey to the Beast Planet, Tekla flees to the Cluster to warn its inhabitants about the impending invasion, but is injured and rendered comatose shortly after contacting Graveheart and King Cryos. She eventually recovers, and serves The Alliance as their resident expert on the Beast. She's always accompanied by a small droid named Vox. 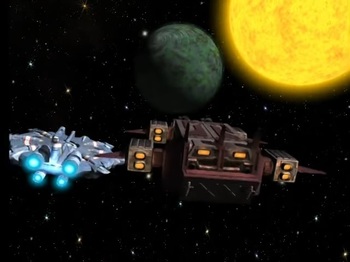 Does anyone have a problem sacrificing this world to save our own?

The last planet the Alliance encounters before they enter the Nebula. A dense jungle world with no form of fauna. Due to the lack of higher life forms, the Alliance initially wanted to simply ignore it and let the beast devour it to buy time, but Femur came up with a plan to use it as a bomb. With the moral implications of what they're doing already causing friction among the Alliance leadership, it gets all the more complicated when they find out that the forests themselves are actually sentient. 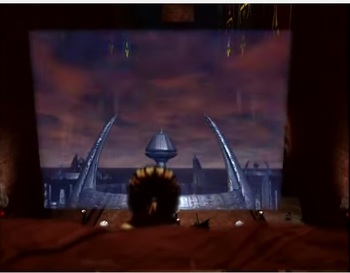 All that remains of these brave warriors, is a recording.
The other inhabited planet of Tekla's home solar system.
Planet Remora 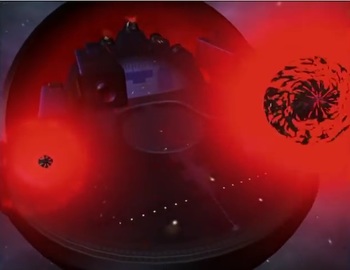 The farthest out planet from the cluster, even further from the sun than Planet Ice. Having no atmosphere, Remora is a dead world with no native life forms inhabiting it. This made it the perfect base of operations for the Beast Planet's advance forces. It is later revealed that all of Blokk and Lamprey's schemes were just to divert attention away from Remora as the Beast converted it into a massive, planetary battle station. 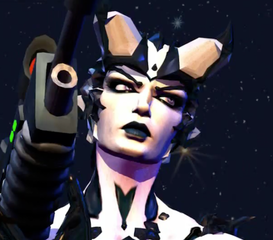 Voiced by: Janyse Jaud
"Look at my men; they're willing to die for me! Isn't it wonderful!?"

A crystalline alien who crash-landed on the Prison Planet, Jewelia's charisma allowed her to quickly amass followers to challenge Sternum's group and fight for control of the prison.