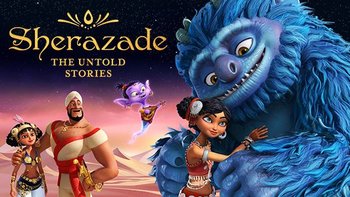 Just when you thought the Arabian Nights couldn't get any more weird yet charming.
Advertisement:

Sherazade: The Untold Stories is a 3D CGI-animated series developed by the German studio Hahn Film AG. It tells the story of Sherazade, the best friend of Karim, the current Sultan after his father shortly passes away. All quickly leads to chaos, however, when Karim's brother and his partner, specializing in the dark arts, successfully turn the Sultan-to-be into a beast. Both Karim and Sherazade are forced to flee the palace to avoid capture, and are tasked to find a way to return Karim back to his human form in order to take back the throne and return peace to the kingdom.

This series is currently in production, with 7 out of 26 planned episodes already released for viewing.