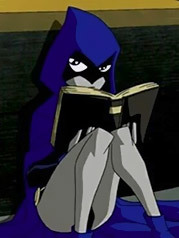 Cold on the outside... 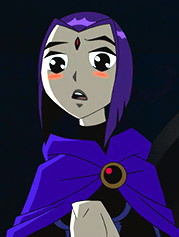 ...sweet on the inside.
"Although she seems to lack emotion, this is largely a pretense."
— The Talosians, Star Trek: The Original Series
Advertisement:

Allegorically speaking, a kuudere is like snow: it may be cold and harsh at first glance but it is also what keeps autumn's seeds warm and safe until spring.

Similarly, while perhaps appearing apathetic and awfully pragmatic, it is but a frosty mask that protects tender, delicate feelings deep underneath the facade, waiting for someone to melt the snow and allow them to blossom.

Always In Control: Comes off as "kuu-" (cool) because of emotional control, maintaining a calm, collected exterior. Expressions are subtle, with watery eyes being akin

◊ to bawling, and a small smile being akin to a

◊. Feelings may be filtered through snark

◊ or dry wit. The appeal is their bluntness and directness, in contrast to shy reserve or boisterous rowdiness. If playing a Love Interest, either the other partner will be the source of Will They or Won't They?, or they'll skip that and the focus will be on the drama that comes after they admit They Do. Occasionally this is a trait of a more exaggerated character, the Emotionless Girl. Our page picture, Teen Titans' Raven, is an example of this variation.

Once You Get To Know Them: They will show the 'dere' side, but strangers and the untrusted will see the 'kuu' side. Friends all consider them to be caring and in private moments with them you may just catch them laughing. Although it will still be considered unusual. It's not that they spare friends any of the Deadpan Snarker wit or that they don't act 'kuu' with them sometimes. The friends just understand it better than those that aren't close.

Mood-Swinger: Alternating between 'kuu-' and 'dere' persona depending on mood. What controls the mood? Some may have clearly defined Berserk Buttons. Companions might learn how to manipulate this to their advantage. Others might switch moods at what seems to be random moments, which can be very unnerving or confusing to those nearby. Some might contend that this version isn't 'kuu-' (cool) enough to qualify as a kuudere, and might place them in some other category.

Obviously these variations aren't always used pure, and often are mixed together in different characters. Again using Raven as an example, while she fits the first variation best, she certainly has elements of the other two.

Compare Not So Stoic and Stoic Woobie. Related to Beneath the Mask. See also Rei Ayanami Expy.

This defines a fan-speak term. No examples, please. See Sugar-and-Ice Personality for examples from all media.