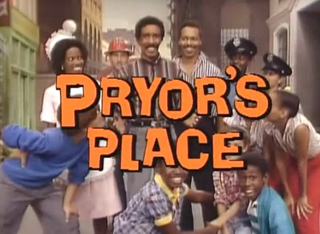 Whoa-oa-oa! Let's head on over to Pryor's Place!
Advertisement:

Pryor's Place was one of Sid & Marty Krofft's more obscure series from The '80s. The series was heavily influenced by another educational television series featuring humans and puppets coexisting on an inner city street. However, the basic format of this series was that each episode, Richard Pryor would book-end the show - his opening monologue was reminiscing about a childhood experience of his, the ensuing story would follow "Little Richie" and his friends on whatever it was they had gotten themselves into, then Pryor's closing monologue would be whatever the lesson of the story was.

Pryor himself also would appear in the story, usually playing a different character who inhabited the street, such as Chills the street musician. Underneath the street in the sewers, lived Al and Marjorie, two rat puppets - Al was pretty much a lazy bum who always sat on the couch reading the paper (even though he couldn't really read), though Marjorie was more free-spirited and took interest in whatever the kids were doing above them.