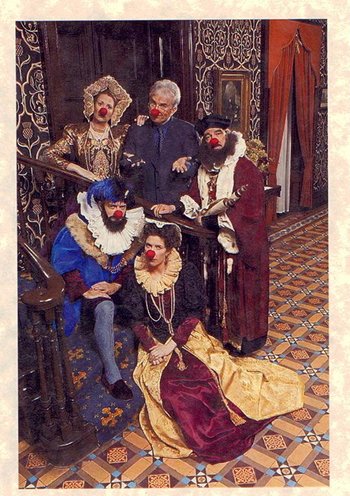 What if television had been around for the last five thousand years?

Such is the premise of History Bites, a Canadian Sketch Comedy series (1998-2003) created by Rick Green (of The Red Green Show and Prisoners of Gravity) to explore and satirize history through the lens of current pop culture. Each episode opened with Rick explaining the topic and dramatically pushing a button on his remote control, "changing the channel" to begin the meat of the program.

The show proper is presented as what a bored channel surfer sees as he flips through programs like the news, Martha Stewart Living, Jeopardy! and Seinfeld against the backdrop of historical events like the assassination of Julius Caesar, the popularity of the plays of William Shakespeare, the revenge of The Forty Seven Ronin, the rise of Christianity, the invention of agriculture, and the shootout at Fly's Photographic Studio (better known as the gunfight at the OK Corral).

After the series ended, the show did five one-hour specials that removed the channel-surfing idea. Reruns of the series are shown on the Comedy Network and History Television.

The show avoided the Nostalgia Filter: Rick ended each episode claiming that injustice is connected to prejudice and ignorance, that advances in science and medicine make life today so much better than any point in history, and that History... Bites. *click*

A growing number of episodes may be viewed for free on the series' website.

Set during the Spanish Golden Age, this TV "theological difficulties" blurb exhorts its viewer to "please do not adjust your sect."

Example of:
We Are Experiencing Technical Difficulties

Set during the Spanish Golden Age, this TV "theological difficulties" blurb exhorts its viewer to "please do not adjust your sect."