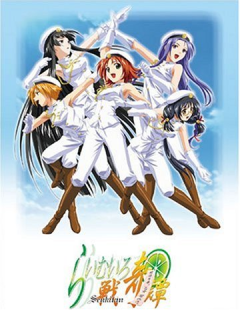 "It is the 37th year of the Meiji Era. At the edge of the grand continent of Eurasia, the echo of guns resounded. Japan was still a weak country at the time. Their existence depended on the fortress protected by the army of evil. And the ones who faced it were delicate girls. This is a story of love and inspiration of five young girls and one young man who assisted them."
Advertisement:

Shintaro Umakai has been accepted as a teacher at the Amanohara Girls' School. What he's about to find out is that the school is aboard a ship, and he's acting as the teacher for the Lime Unit. Five girls with special powers, the ability to summon Raimu, spiritual armored warriors, who will be assisting the Amanohara on its invasion of the Lushun Fortress in Russia.

The five girls are the ditzy Momen Sanada, the tomboyish Asa Kato, the meek Kinu Fukushima, the upper-class Sarasa Honda and the elegant beauty Rinzu Kuroda. Along the way, the girls will come to grips with their own past, while Shintaro comes to grips with his own. There are things he left behind in Russia that will return with a vengeance.

Originally a Visual Novel-slash-battle sim game by Elf, it was adapted into a Thirteen Episode Anime in the winter of 2003. A two-episode OVA followed about a year after, transitioning to its sequel, Lime-iro Ryukitan X. The original game also has a mahjong spinoff, Lime-iro Jankitan, and an Updated Re-release on the PlayStation 2.