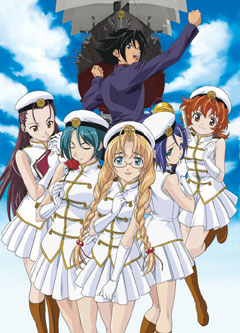 It is the 38th year of the Meiji Era. The Russo-Japanese War that started the previous year had intensified. The Japanese Army was worried about the overwhelming strength of the Russian Army and the mysterious Raimu Army behind the scenes. But, there was a light in Japan. The Lime Tai Army!
Advertisement:

Like Senkitan, Lime-iro Ryukitan X (Cross) ~Koi, Oshiete Kudasai~ started off as a Visual Novel battle sim game by ELF Corporation, released in December 2004, before receiving an anime adaptation of its own in the winter of 2005.

It is 1905. Kyoshiro Inukai has just been promoted to Commander of the new Lime Unit Army, created in the wake of the dissolution of the previous Lime Unit. It consists of his childhood friend Tsumugi Shima, half-Russian Shuro Naoe, studious Nishiki Ii, clumsy ninja Kasuri Hattori and aspiring nurse Aya Nabeshima. In the meantime, Kuki has added a new familiar in the form of a flying squirrel named Toushi to her ranks.

In Russia, a new group of fighters called the Faden Knights, carrying on the legacy of Rasputin, have started attacking. It's time for the Amanohara to set sail once more. The problem is that Kyoshiro knows everything there is about being a soldier, but he's unprepared to be a teacher.