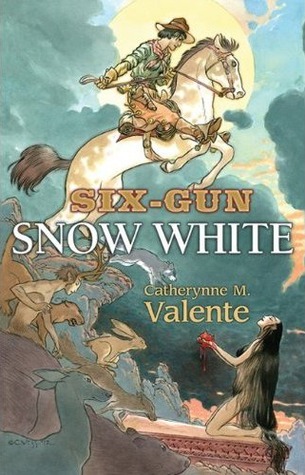 "This is what it means to be a woman in the world."
"Coyote had a plan which he knew he could carry out because of his great power. He took his heart and cut it in half. He put one half right at the tip of his nose and the other half at the end of his tail."
— Apache folktale
Advertisement:

A novella published in 2013, Six-Gun Snow White by Catherynne M. Valente is a retelling of the classic fairy tale reimagined in the The Wild West. While examining the typical themes of relationships between mothers and daughters and beauty being a woman's power, the story also touches on issues of racism and the difficulties of being biracial, the domination of women by men, the domination of Native American cultures by whites, and digs deeper than most adaptations into the psychology of abuse.

The story begins in the mid-1800s with a Mr. H traveling to Montana Territory shortly after making his fortune in silver. Looking to expand his business ventures he arrives in Billings where he meets a Crow woman called Gun That Sings. He is immediately smitten with her, and she is immediately horrified by his attraction. Though Gun That Sings tries to resist his advances and proposal of marriage, Mr. H has his way and takes his new Indian bride to California where they have a girl with hair black as coal, lips red as blood, but unfortunately her skin is not as white as his.

The girl grows up in solitude in her father's house, forbidden to leave the grounds. Her only friends are the animals in the zoo her father has built for her, and her gun, a revolver she calls Rose Red. Mr. H spoils his daughter with gifts, but never properly loves her, so it's still a lonely existence. Everything changes when Mr. H remarries. The new Mrs. H is a white woman from Boston who seeks to take her new half-breed stepdaughter under her wing and purify her by any means necessary.

The girl knows from the start, though, that Mrs. H doesn't and can't mean her well when she never uses her name. Instead she renames her stepdaughter for something she is not and can never become: Snow White.