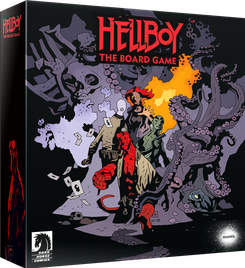 Hellboy: The Board Game is a tabletop game developed by Mantic Games featuring characters and storylines from the Hellboy universe. Released in 2019, Hellboy features two to four players each selecting an agent from the B.P.R.D. and undertaking casefiles that feature numerous fights with minions, gathering of clues and battling with bosses from throughout the Hellboy canon.

Core agents players can pick between include Hellboy, Abe Sapien, Liz Sherman and Johann Kraus, with a number of B.P.R.D. agents like Roger the Homunculus and Kate Corrigan, supernatural allies such as Lobster Johnson and "The Visitor" and even alternate forms of Hellboy such as his demonic and childhood selves (naturally titled, "Pancakes Hellboy" in the latter case) being available in the base game and through expansion packs.

The base campaign of the game is based on characters and elements from the early Hellboy stories, roughly between "Seed of Destruction" and "Box Full of Evil," as well as short stories such as "Pancakes", "Nature of the Beast", "The Iron Shoes" and more. Several expansion packs for the game have been created based on Hellboy storylines such as "The Conqueror Worm", "Hellboy in Mexico", "Darkness Calls" and "The Wild Hunt."

Hellboy: The Board Game contains examples of: