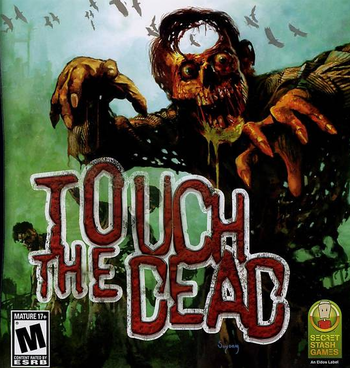 Touch The Dead (or rather "Dead 'n' Furious" as it's also known) is a Rail Shooter Survival Horror by Dream On Studios for the Nintendo DS.
Advertisement:

You play as Rob Steiner, or rather Prisoner #1809, a recent transfer to Ashdown Hole State Penitentiary who's been sent to prison for a crime he didn't commit. He's simply sitting in his cell, when suddenly, his door just opens up. When he walks out, though, he suddenly finds the prison is overrun with zombies. With no knowledge of what happened, Steiner decides he has to get out of there.

The hook of the game is that you attack the zombies by touching them on the bottom screen. Tap the screen to shoot (or swipe if you have the crowbar), and to reload, drag the ammo across the screen to the clip holder.

Touch The Dead contains examples of: