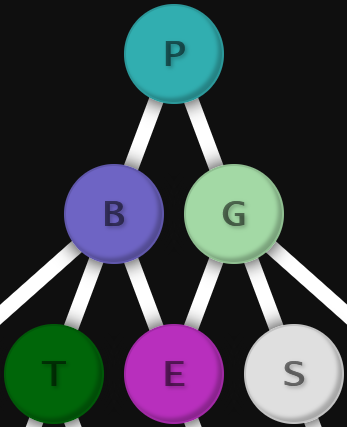 Prestige Tree is an Idle Game by Jacorb 90 released in 2020. Initially, you click on a node with "P" on it, claim prestige points, and buy prestige upgrades once you have enough of them. As you play, more nodes show up and become accessible, which feature more things that let you progress further, like boosters and generators, though these reset your prestige points and upgrades until you gain the ability to not make them reset earlier stuff. Can you reach e1e11 points?

The game proved to be influential enough to start The Modding Tree engine for games based on the initial idea, attracting a decent modding community who made plenty of them. An official remade version called Prestige Tree Rewritten has been made in that engine featuring different upgrades, new nodes and altered mechanics for certain tree nodes.

, while Prestige Tree: Rewritten can be played here

The original (and usually Rewritten as well) provides examples of: