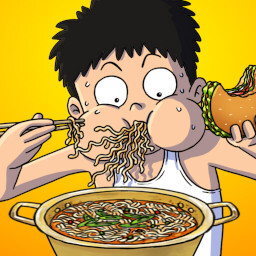 The Most Delicious Game Ever!
Advertisement:

Food Fighter Clicker is an Idle Game for smartphones by fffungame released in 2020. You play as a teenage-looking boy who at first is full with a single boiled egg, but as he eats and makes money, can take on more difficult to eat dishes. However, he can't bite more than he can chew, and even if he can chew, he still needs to digest everything he's eaten. There are upgrades to buy and clothes as well as furniture that can be won by gacha.