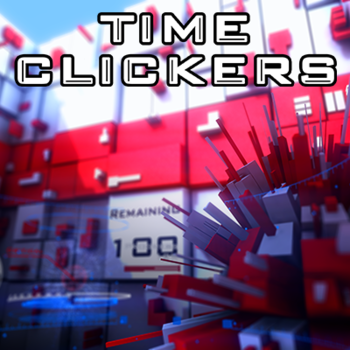 Time Clickers is a hybrid Idle Game/First-Person Shooter released by Proton Studio in 2015, as a spin-off of Time Rifters. In this game, you destroy waves of enemies via clicking or passive DPS to collect money in order to upgrade gun teammates and buy abilities. What sets this apart from other PvE clickers is that enemies are made out of cubes which all need to be destroyed via clicking or teammates, and different teammates specialize in destroying cubes differently. Collect elusive Time Cubes to improve your abilities after a Time Warp, and later on, Weapon cubes to improve your weapon.

It can be played on the web (here

), on Steam, or on mobile devices.