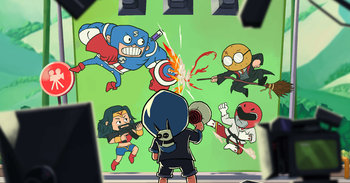 is an Idle Game where you recruit actors, train them to evolve into hilarious parody versions of famous film characters, and cast them in movies that suit their strengths to max out the Potatometer!

You're just a boy with big dreams of becoming the next hotshot Hollywood director - but what do you do when your parents tell you to just focus on your failing grades? Why, you run away to Hollywhoot, of course, a magical land where all your director dreams can come true! Direct movies, produce television shows for passive income, and aim for the Oscars of your dreams!