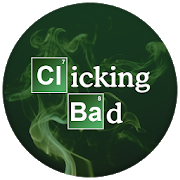 Clicking Bad is an Idle Game where, as the name suggests, you produce and sell crystal methamphetamine.