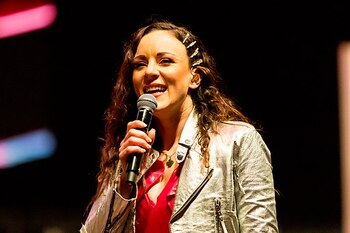 She had her first, and arguably biggest, success under the aforementioned Blümchen moniker in the 90s and early 2000s, when she released four Electronic Dance Music albums in the German language. She scored several big hits during this time, including Herz an Herztranslation Lit. "Heart to Heart" in English, which it was also released in eventually; more on that below (her debut), Boomerang, Kleiner Satellit (Piep, piep)translation Lit. "Little Satellite (Beep, beep)" in English; this song was also released in English, albeit only as an album track, as just "Little Satellite" and Heut' ist mein Tagtranslation Lit. "Today is my Day" in English (her only #1, in Sweden of all places).

Her first two albums, Herzfrequenztranslation lit. something akin to "Heart frequency" and Verliebt...translation lit. In Love... were also released in English in Eastern Europe and Asia, under the names Heartbeat and In Love... respectively. For this, she used the artist name Blossom.

Throughout her career as Blümchen, her sound varied quite a bit, ranging from pure happy hardcore on the first album, to her first ballad on the second, to more Eurodance influences and pop hooks on the third and fourth. This came to an end in early 2001 after her farewell tour, when she retired the Blümchen moniker and decided to continue under her birth name — Jasmin Wagner.

Under her birth name, she took on various different activities, such as theater, a few movie roles, and hosting more TV shows (which she had already done quite a bit in the Blümchen era as well). She also wrote several songs for other artists, such as "Orchester in mir" translation lit. "Orchestra in me" for singer Christina Stürmer (and later covered by teen pop band Saphir). She also kept releasing music, albeit more sporadically, with a sound initially quite different from her Blümchen-releases. The first release under her real name was a cover of ''Santa Claus is Coming to Town"; her first originally-penned song released under her real name was "Leb' deinen Traum"translation lit. "Live your dream".

The second album released under her real name was a Cover Album full of songs by late German Schlager singer Alexandra, to accompany a biographical theater show she starred in as the main role. This album was sold exclusively at Reader's Digest in Germany.

In 2019, Jasmin decided to perform again under the Blümchen-moniker, even releasing some new songs in the process. Her comeback single was a cover of "Computerliebe"translation lit. "Computer love", originally by Paso Doble (just like her old hit "Herz an Herz"). She also released a new remix of "Herz an Herz" featuring Cuban singer Raykuba, as well as several other collaborations, including one with David Hasselhoff.

Then in 2021, she released her third album under her real name called Von Herzentranslation lit. "From the heart". Unlike her previous works released under her real name, this album is closer in sound to her Blümchen-material (branded "Electro-Schlager" by Jasmin herself), albeit with slightly more mature songwriting. It was clearly intended to appeal to those Blümchen-fans; the singles off the album are even listed under both names on Spotify! (The album itself isn't, however.) This album also contains her old unreleased song "Sonne in mir"translation lit. "Sun in me" in rerecorded and remixed form as the final track.