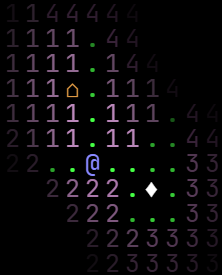 Cleansed is an Idle Game that resembles a Roguelike in terms of aesthetics by yhvr that was released in 2021 for itch.io's Incremental Game Jam 2. You play as a @ that walks around a dark place. Sometimes, glass shards show up on the ground. Collecting them make the view brighter, lets you remove walls of darkness that prevent further exploration, and even let you buy upgrades.

The game is playable here