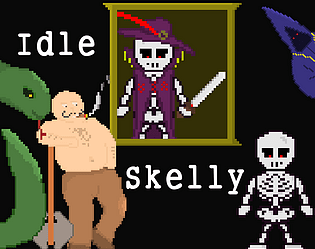 Idle Skelly is an Idle Game for Ludum Dare 44 by Morg released in 2019. The playable character is a skeleton who has to spend his HP to buy upgrades. Initially these give him armor and improve his regeneration, later on he gets to explore other places and fight enemies. The goal is collecting all items possible to imprve stats and beating the king.