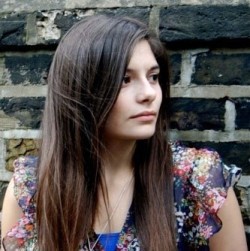 Georgina Leonidas (born 28 February 1990 in London, England) is an English actor. Her brother Dimitri Leonidas is also an actor, and her older sister Stephanie Leonidas was the star of Mirrormask. Georgina is best known for playing Katie Bell in the later Harry Potter films, but has acted in other shows, movies, and theatrical productions. She is a friend of fellow Harry Potter actor Jessie Cave, and has appeared in some of Cave's Pindippy comedy sketches.