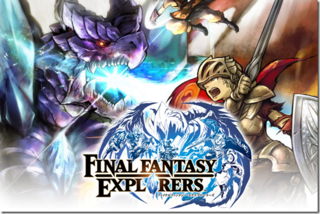 Crystals — mystic shards with the power of the stars. Through their grace did all life evolve imbued with souls. In time, humankind learned to harness energy from crystals, surpassing other lifeforms. During just such an era, brave souls tackled unexplored lands and battled mighty foes in search of new crystals. The people called them: Explorers.
Advertisement:

A spin-off of the monster-huntingly popular Final Fantasy series.

The adventure revolves around a four person party of Explorers from the village of Libertas as they venture to the mysterious island of Amostra, which houses an abundance of Crystals. The one problem? Those crystals are guarded by immensely powerful creatures. The Explorers must hunt down these monsters in order to take their crystals, using weapons and armor crafted from the monsters themselves in order to progress.

And if this concept is sounding a little bit familiar to you, you are not alone in thinking that.

Directed by Atsushi Hashimoto, Final Fantasy Explorers features epic boss fights, tons of loot, and the trademark Job System, as well as the ability to transform into famous Final Fantasy characters such as Cecil, Cloud, and Lightning.