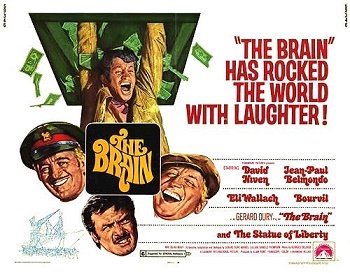 Who's got a computer for a mind?
The Brain!
Who's got an IQ like an Einstein?
The Brain!
He's a genius but he's a schemer who plays a fiendish game
Diabolically cool, don't fool with The Brain!
— The American Breed

, main theme of the film

Two clumsy French thieves, Anatole (Bourvil) and Arthur (Belmondo), plan a spectacular heist: the attack of a freight train which carries secret NATO funds from Paris to Brussels. What they don't know is that another, much more manned and well-equipped team is planning the same thing. That team performed the Glasgow-London Great Train Robbery

and is headed by Colonel Carol Matthews a.k.a. "The Brain" (Niven), a British criminal mastermind, who has also a deal with Frankie Scannapieco (Wallach), a Sicilian gangster.

Not to be confused with the 1988 sci-fi film of the same name about an actual literal brain.

The Brain provides examples of: