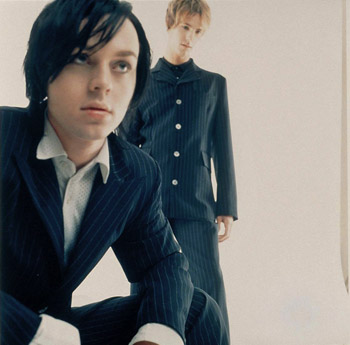 I want to stand with you on a mountain
I want to bathe with you in the sea
I want to lay like this forever
Until the sky falls down on me
Advertisement:

Savage Garden (1994 - 2001) were an Australian duo, consisting of Darren Hayes (the brunette) as vocalist and Daniel Jones (the blond) as instrumentalist, whose brand of soft-rock mixed with straightforward pop was a surprise international hit as the 1990s exited the Grunge/Gangsta Rap era and re-embraced bubblegum pop. Though they only released two studio albums (in an era where artists didn't shell out an Updated Re-release to tide fans over), they had many successful singles including "I Want You", "To the Moon and Back", "Truly Madly Deeply" and "I Knew I Loved You", and maintain a cult following to this day.

After splitting in 2001, Darren Hayes continued with a solo career to some success.