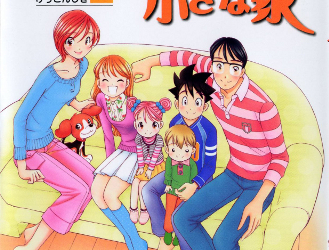 The Brady Bunch... in Japan!

Shoutarou Ninomiya receives an award for fifteen years of being the only employee at his company never to take a vacation or day off. He rushes home excitedly to show the certificate to his wife... who hands him divorce papers and the care of their two sons. Hoping it will make his wife forgive him and come back, he quickly buys the eponymous orange-roofed house.

Cut to the beautiful Natsumi Okajima and her two daughters coming back from a trip to visit her sister. Entering their house, they find a strange woman stepping out of the shower, who promptly runs into the bedroom crying "Your wife and kids are back early!" Now, freshly divorced and wanting to start anew, she splurges the settlement money on a cute house with an orange roof...

Shoutarou and his sons, and Natsumi and her daughters both show up to move in on the same day. Turns out they've both been tricked by a Shady Real Estate Agent and bought the same house. Unable to locate the con or get help from the police and with nowhere else to go, they have no choice but to temporarily move in together.

Little House with an Orange Roof (Orange Yane no Chiisana Ie; subtitled in English as My Little Home) is a seinen manga by Yamahana Noriyuki, the creator of If I See You In My Dreams. The manga was serialized in Business Jump from 2005 to 2007, and compiled into eight volumes. It follows the gradual knitting together of two half-families, and the growing sparks between Natsumi and Shoutarou, along with his attempts to readjust from a workaholic to a family man.

This eight-volume series provides examples of: