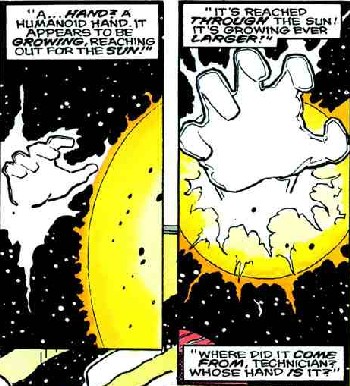 Master Hand had a lot of bit-parts before he made it big.

Squadron Supreme: Death of a Universe is a 1989 story of the Squadron Supreme, a group of Captain Ersatzes of the Justice League of America published by Marvel Comics. The story was a big Take That! to DC's Crisis on Infinite Earths.

The story is set in the aftermath of the 12 issues limited series, as the surviving members of the Squadron begin to dismantle the "Utopia" program they had renounced. But the Scarlet Centurion, Master Menace and Professor Imam (who warned the Squadron) all notice a really dangerous thing going on: a giant white human-like hand of a cosmic size appeared next to the sun, and will soon engulf it. Hyperion, Menace and the Centurion met at Menace's lab, and agree to work together to destroy that thing. Menace and the Centurion build a machine in the distant future, and take a spaceship to the hand, which is now a full cosmic-sized human figure. Hyperion, Doctor Spectrum, Lady Lark (who took Blue Eagle's wings) and Whizzer (using a tredmill that allows him to run in space) take the four parts of the machine to strategic points around the entity.

It was all in vain. The machine did not work. Inertia's power did not work. Imam's attempts to talk to the entity did not work. The Overlords' mental commands did not work. The sun was engulfed, and the being keeps growing and growing, nearing Earth itself. But when it engulfed the Squadron's ship, it came into contact with Arcanna's newborn son. Perceiving great mystic potential in him, Imam had appointed him the new master of the mystic arts before dying; but now the baby and the entity switched places. The baby is replaced by a common man, who then vanishes, and the giant white man is replaced by a giant white baby, who begins to shrink and release the sun, and then move to the other consumed universes to release them as well.